Khabib, what do you think of Anwar's victory in Port Dickson?

For me, the biggest story the past week is not Anwar and his antics in PD.

The biggest story for me the past week is this guy 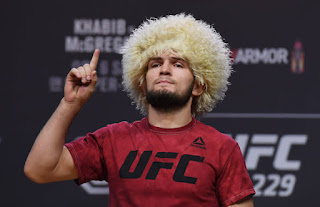 In case you don't know him, he's

What I like most about him other than his fighting prowess is that he is a good person, devout Muslim, and always humble attitude. He can also be quite funny sometimes.

He successfully defended his title in a fight the other Saturday, beating MMA superstar

I really enjoyed watching the fight....and the brawl after the fight.

That includes the built up to the fight too,


and what happened after Khabib's victory


Well, I hope to see more of Khabib's victories in future.

On the light side, since I watched his victory over McGregor, I did imagine asking Khabib this,

"Khabib, what do you think of Anwar's victory in Port Dickson?"

And I imagined this is his reply,