Don't get too excited, it's just politics

A lot of people seemed excited about this event in Port Dickson last night, 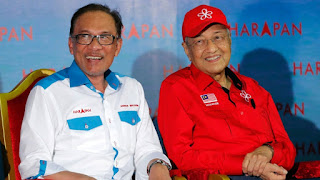 These are from my last post which has nothing to do with the PD by-election;

Anonymous9 October 2018 at 00:02
It's great to see Tun M and Anwar sharing the same stage in Port Dickson. Go Pakatan !


Anonymous9 October 2018 at 06:53
Wow....this must be Annie's greatest nightmare after all her futile spinning efforts to sow the seeds of division. Even Daim Zainuddin campaigned for Anwar in PD.

Well, actually my greatest nightmare is losing my beloved and not some politicians sharing the same stage.

Politics will always be just politics to me. It's never for real, either in friendship or enmity.

That's why when the fighting broke out between Dr Mahathir and Najib back in 2015, I decided not to take sides. This is my all important post on April 2 that year;

I made that decision primarily because I don't want to be a permanent enemy of any of my friends who took sides at that time.

And true enough, the fighting was bitter, and in fact worse than all the Umno-Pas or Umno-DAP fights.

Closest of friends became bitter enemies till this day.

As for myself, I think I lost some friends because I refused to side with them but at least I believe they don't regard me as enemy either. Well, that's good enough for me.

For me those are such a waste. Life long friendship lost because of just politics which is not even for real.

The same with this Dr Mahathir-Anwar thing.

Looking back at their history, I believe the same thing happened among ordinary people who are their supporters.

It's all lost just because of this,

No need to get too upset.

One day, maybe Dr Mahathir will be okay with Najib again, just like his view of Anwar now, insyaallah.

It's just us, the ordinary people who should not get too excited about it all.

Try not to lose your friends and those you love because of it.

It's all actually not for real, okay. Try to remember that.
Posted by Annie at 13:11