Rallies could be a new Malaysian culture

I have to admit that the Maruah Melayu Rally today was a success.

Maybe it didn't restore the Malays' dignity which its organisers claimed they were championing, but in term of turn-out, it seems to match the rival Bersih 4.0 which was dominated by members of the Chinese community. 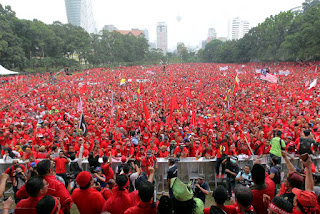 I'm still against street rallies though, either it be in red or yellow.

But I guess these rallies will from now on be a new culture of our society.

Maybe we are indeed now matured enough to have these rallies without destroying our country.

After all, the rallies have ended peacefully.

There was a commotion at Petaling Street today, but I guess that's an isolated incident.

The main body of the protest had abided by the laws and that was good.

I'm also glad that they turned up in a big enough number that they didn't embarass the Malays whom they said they represent.

Still, I'm worried over where all these are leading us Malaysians.

It looks very much like we are becoming more racially polarised than ever.

The rally today, despite it's Malay rights undertone being somewhat muted by the organisers, was still meant to tell the Chinese who dominated the rival Bersih 4.0 rally that the Malays are still in charge of this country.

That's to me is not a good indication of what the future lies for this multi-racial country.

The leaders among us must do something to stop this phenomenon.

I really hope that they realise what's going on and the danger of what's coming if the trend continues.

I think they really need to sit down and talk instead of shouting at each other just to further their political agenda.

Those rallies may be relatively peaceful now but I'm still not comfortable about it being a new element in our culture.

There are a lot of negative vibes about it which I feel could eventually harm this country.
Posted by Annie at 22:06