Just another short one between works.

Saw this and was shocked,


Malaysia was clearly no match for United Arab Emirates (UAE) who are ranked 70th in the world, after being humiliated 10-0 in the third match of the qualifying round for the 2019 Asian Cup at the Mohammed Bin Zayed Stadium in Abu Dhabi, today.
The defeat saw Malaysia, who are at 168th placing, remain at the bottom of Group A, after losing 6-0 to Palestine and drawing 1-1 against Timor Leste in their previous two matches.
What happened lah?

The tall, dark and handsome Youth and Sports Minister Khairy Jamaluddin must do something.

KJ, they sent our football team or our basketball team?

Maybe KJ should revamp the team and being the hands-on minister that he is, join the squad as its striker.

KJ, I know you can score goals one, okay. 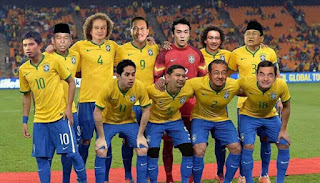