A day at UiTM and what others may do to it

Been a busy weekend.

Spent the whole of yesterday at the UiTM main campus in Shah Alam. 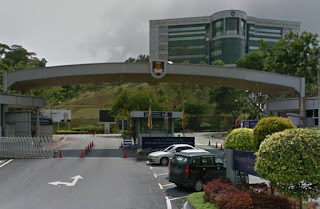 Chauffeur duty for my cousin who registered for an English degree course at the university.

Not really a pleasant experience though.

The traffic jam within the campus was horrible and the registration process was also not very smooth.

I felt that the facilitators didn't do a really good job at managing the whole thing.

UiTM should do better on this next time.

They must do more to improve so that people don't say bad things about the university, such as when its graduates were being called slow learners which is not true.

Well, that aside, all the best to my cousin.

Hopefully she will enjoy her studies there and I'm quite sure she'll come out of it with better English than mine.

Honestly, my English is quite bad. and I don't want my cousin to end up like me.

But I also hope that my cousin would not end up like some of those pricks who think so superior of themselves just because their English is better than others'.

Having excellent command of English does not mean oneself is superior in everything, okay.

I don't believe that anyone should claim that he/she knows everything and being right all the time.

Let's say one's expertise is the English language, that does not mean he/she is also a political expert.

Being able to speak the language fluently doesn't mean that what were being said were right.

I always cringe whenever I met someone who think that he/she knows about everything, such as when people who never even lived or worked in my home state of Johor writing as if knowing everything about it.

But then again, this Malaysia Baru seems to be okay with that.

Look at this one they are going to have at Sunway University; 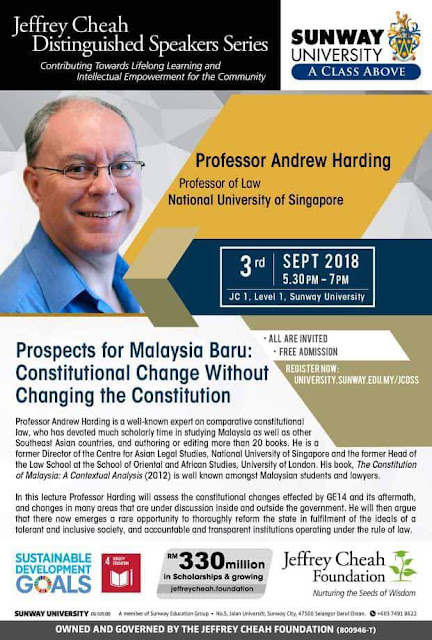 Yup, a white guy from a Singapore university is going to tell us how to have constitutional changes without changing the constitution.

It's being bandied as Malaysia Baru's prospects.

I guess such constitutional change to be recommended will affect bumiputera institutions such as UiTM, among others.

That's because one of the main complaints against our constitution is in regards to the bumiputera rights.

Whatever it is, I wonder if the guy had ever advised Singaporeans on how to improve their constitution...without changing it.

Sunway University.....I studied there for a while when it was still a college in PJ but quit because I felt it was not good enough.

Seriously, at that time, for the course that I took, I felt that UiTM's was better.
Posted by Annie at 13:03