Please leave Tabung Haji and the pilgrims in peace

Someone forwarded me these earlier today, 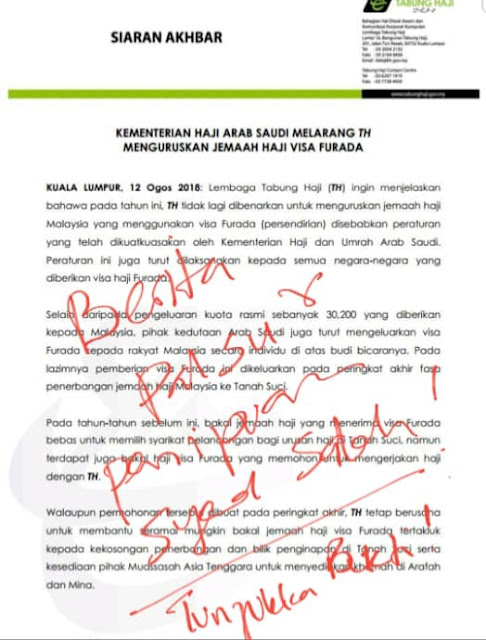 Then I checked what's going on and it turned out that Tabung Haji was coming under attack again.

What la these people....

Come on la. How can Tabung Haji came out with such a statement if it's not true?

It involves the Saudi Arabian authorities for heaven's sake.

And above that, this is about people going to the "rumah Allah".

Surely Tabung Haji won't dare to lie about such things.

Can't these people even see that?

As I said in this previous post last month,


I don't know why it became everyone's favourite punching bag.

Before this, the pro-PH people whacked it for all kind of nonsense, now the pro-BN people pulak.

Can't these people give Tabung Haji a break, especially now that it is doing its best to serve the pilgrims of this haj season?

If Tabung Haji can't assist certain pilgrims because the Saudi Arabian government wants to be responsible for those people, how can it be blamed for the whole thing?

Don't la simply turn everything into an issue.

Sometimes I felt that these critics of Tabung Haji have their own agenda and they are whacking it not really because of their concern for the pilgrims' welfare.

And then, like the last time when they said Tabung Haji had not provided accommodation for the departing pilgrims, they even put quite a bit of politics into it.

That dragged some unnecessary statements from Umno leaders which were not factually correct and made them looked not very clever.

It's the same problem with Umno and BN in the run up to their GE14 disaster - people using their platform to serve personal agenda, making them look bad in the eyes of the people.

I hope Umno leaders will check properly first before making statements such as these concerning Tabung Haji.

Seriously guys, it instead makes you yourselves look bad for complaining about the wrong things.

Furthermore, Tabung Haji has never even been political as it serves all Muslims in this country equally when it comes to managing their pilgrimage to the holy land.

Yes, that's even when Umno and BN were still in power.

So, please la, let the Tabung Haji people work in peace managing our pilgrims over there in the holy land.

They really can do without these sorts of nonsense, okay.