I'm now at a Subway joint in Shah Alam, waiting for my cousin. 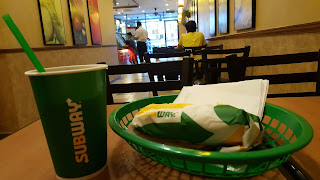 Steak and cheese sandwich with lots of veggie. And Coke.

Not exactly healthy food but who cares, right.

Still got about an hour before my cousin is finished with whatever she's doing.

I'm fetching her home for the long weekend because she can't drive.

She's the one who enrolled at UiTM that day.

Well, I don't mind doing these sort of things.

Nothing much to write actually. Just killing time.

Okay may be I should tell you all this.

I think the prices of goods and services will go up quite a bit once the SST is implemented on Saturday.

In fact, some have already went up.

Just this morning my friend told me that the price of pre-cooked pizza she normally buys at Aeon Big supermarket has gone up.

I know, you all may say pizza is not an essential item, but that's not the case with my friend.

You see, my friend has a son who is with autism and the boy eats mostly pizza and roti canai. Seriously. He doesn't eat rice at all.

And for pizza, he only eats either those at Pizza Hut or that one prepared at Aeon Big. He doesn't even eat those at Domino Pizza.

Well, that's how it is with children with autism.

So, my friend has to bear with this. Hopefully the price will not go up further after the SST is implemented.

Another thing such as these which worries me is this story,


Well, everyone should buy health insurance, I guess.

That's even include the lower income people. Just in case.

Otherwise it would be difficult.

You know lah how it is to get treatment at the government clinics and hospitals these days.

Let's say your baby got fever, I think it would be quite a bit to go to a government hospital or clinic instead of going to a nearby private neighbourhood clinic.

Like it or not we will be paying the higher consultation fees soon.

I only wish for the government to do something to lessen the rakyat's burden on these sort of things.

The current PH government is supposed to be better than the BN government.

So, hopefully that is true...that things will not be so bad.....especially once the SST kicks in.

Well, SST is better than GST, right? That's what they told us ya.

Whatever it is, I think everyone should heed this advice;

Spend wisely once SST has been implemented – Fomca


Just in case la. Who knows, maybe SST is after all not better than GST.

You know lah, these days, people said something but it turns out into something else.

Okay, need to go now. My cousin just called and wanted me to pick her up now.