This one is sorts of a continuation of this previous post,

I think you all have read this story,


,” Sultan Ibrahim said.
“I’d like to extend the invitation to the youth and sports minister and hopefully he won’t disappoint the requests of the people to see your team defeat the Johor team.”
Khairy is a member of the Malaysian Sea Games polo team.
His comments followed the Malaysian team’s match against Singapore today, in which he singled out an unnamed player who “came on and asked the performing player to pretend to be injured” after the national team had taken the lead.
“So, there’s a photo of him in the team, to be featured in the print media and spread the propaganda as if he was victorious and reliable.”
The sultan said he would play in the Johor team in the proposed match, along with his two sons and two horse trainers, adding that if they lost, he would admit to the superiority of the nation’s Sea Games team.
I received quite a number of messages yesterday over the story.

Unfortunate to say, they were mostly negative.

Some asked me why did Sultan Ibrahim issue such a challenge.

How would I know.

Probably, KJ had done something to irritate the Johor royal household.

I used the word "irritate" because "anger" would not be the right word.

I don't think Sultan Ibrahim is angry with KJ.

Otherwise, he wouldn't be issuing a challenge of a polo match.

A polo match, is a noble game of gentlemen. They drink tea on the veranda of the posh club house while watching the match. All very nice and high class, okay.

You don't get angry with someone and challenge him to that.

I think if the sultan was really angry with KJ, he would instead challenge him to a fist fight.

Of course, that would not happen, right?

For me, the sultan's challenge is more that of a gentlemanly dare to someone who annoys him.

In this case, Sultan Ibrahim was probably annoyed with KJ for fooling around with polo, a sport that he loves, and he issued the challenge, just to prove a point.

Maybe KJ and his team will accept the challenge.

Then, Sultan Ibrahim and his sons will thrash them in the match, after which they will have tea and later on in the evening a banquet with laughter and merriment all around.

The sultan, TMJ, KJ and everyone else will have a good time and everything will be fine again after that. 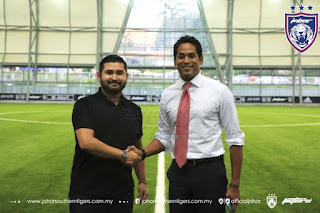 Yes, I think that is what will happen.

So, no need to get all worked up over this matter, actually.

And of course I'm sure the Johor royal polo team will massacre KJ and his team on the field. No doubt about that.

Just have a look at the video of the Johor team, ok.