Good that Malaysia is really neutral over Arab quarrel

Last month I wrote this,

I was told that the people who wanted us to take sides in the dispute wanted Malaysia to be with the other Arab states going against Qatar.


The Malaysian Insight understands Foreign Minister Anifah Aman is firm that Putrajaya, as a neutral party in the Gulf diplomatic crisis, will host Emir of Qatar Sheikh Tamim Hamad Al-Thani when he visits next month
But Defence Minister Hishammuddin Hussein, who is also the Special Functions Minister and seen to be close to the Saudi government, wants the trip delayed until peace is brokered between the Middle East nations.
"There is a spat and Anifah is unhappy, to put it diplomatically, that his ministry's decisions and jurisdiction is being questioned. The emir has been invited and it cannot be delayed," a source told The Malaysian Insight.
Then both Hishammuddin and Anifah immediately denied Jahabar's story,


Hishammuddin Hussein and I have long been working very well and closely with each other on many occasions,” Anifah said in a statement.
“The government of Malaysia looks forward to the state visit by the emir of Qatar and the Ministry of Foreign Affairs with other Malaysian government agencies are currently making the necessary preparations for the visit,” he added.
He also said Malaysia had made its position clear on “the ongoing difficulties between the Arab Quartet and Qatar”.
“Do you really think that I can stop the emir of Qatar if he wants to come?” Hishammuddin said at a press conference at the Parliament lobby.
Whatever it is, I'm glad that it's confirmed now Malaysia will remain neutral as far as the Arab quarrel is concerned.

I believe that's the best for the country.

It doesn't matter to me that Jahabar's story, and in a way my post on the matter too, were denied by the ministers yesterday.

For me, that's only natural.

I don't know about Jahabar, but I didn't write that post of mine last month simply to make the ministers seemed to be quarreling  with each other over the issue.

I didn't even mention any of the ministers' name.

My posting was actually just an appeal for PM DS Najib Razak and his government to do the right thing which is to remain neutral when it comes to other people's disputes.

In this case, I believe that we have a good foreign minister in Anifah and therefore Najib and the government should trust him and his people at Wisma Putra to handle such matters. 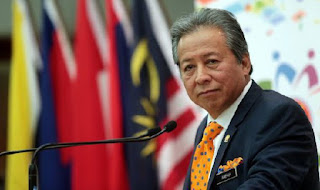 I also think that Anifah is the best Sabah guy that Najib have in his Cabinet.

The guy is cool and I really believe that he knows what he is doing.

These are two of my previous postings on him,


Please let Anifah do his job