Another wedding and a bit on Johor MB

Was at yet another wedding reception today. Been like this for the last four weekends. 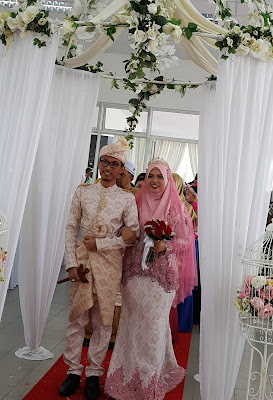 Wishing and congratulating both of you on the special day of your lives.May you have lifetime love, harmony and happiness.Have a great marriage

I quite enjoyed attending the wedding.

Ate quite a bit too,

Very sedap, but I think if I eat like that for one week straight, I would probably be dead. Too rich.

Anyway, as I was sitting quietly there eating my food, I received these wassap messages from a friend.

Apparently, Johor Menteri Besar DS Mohamed Khaled Nordin was having lunch with about 10 of his people at the Luk Yu Tea House in Bukit Bintang, KL

I guess that more or less an indication that the general election is not likely within the next two or three months.

Many are saying now that it will be in November.

That couldn't be, as Khaled seemed to still have the time to spend his weekends in KL.

If the election is so near, I don't think he would have the luxury to spend precious weekends outside Johor.

I remember his predecessor, TS Abdul Ghani Othman spending all his weekends on exhaustive tour of all the kawasan peti undi in Johor as far back as a year before the last general election in 2013.

Ghani can't do that during the week days at that time because he had the state administration to run too.

I'm quite sure Khaled would do the same too if this coming general election is already just around the corner.

He wouldn't have time to hang out with buddies at a fancy restaurant in KL during the weekends if the polls will be in November as predicted by a lot of people now....right?

Unless maybe Johor BN's election preparations are already in tip top condition that he can afford such luxuries.

Hmmmm.....I'm a bit skeptical about that.

Talk too much, people get angry with me pulak.

Okay, here's some music to cheer up your weekend,

That drummer is the fantastic Kanade Sato.