The law that should be proposed by the PKR senator

Two days ago, a PKR senator proposed a law to punish women for seducing men into raping them.

Of course there was a hue and cry about it, forcing the stupid guy to retract his proposal and apologise.

Even Anwar, who of late is trying to portray himself as being saintly made a statement.

I think you all know about all that by now.

Well, what baffles me was how could that Mohd Imran Abd Hamid guy be that stupid. 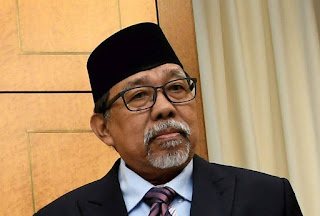 Didn't the PKR people, and that must include Anwar, who made him senator know that the guy is a nut case?

They must have not checked on him properly.

In fact, they fielded him for the Lumut parliamentary seat in GE13 and he won.

Maybe they were desperate for talents that when they saw that he was a retired admiral they decided to give him a job.

Lucky that our navy had not been to war when he was in charge.

Anyway, I think the retired admiral should have proposed a different but similar law instead - a law to punish men who seduced men.

Yup, I would support such a proposal.

After all, PKR could greatly benefit from such a law.

That would prevent all the handsome young men in the party from trying to seduce their married male leaders....anf the other way around.

Too many such cases in the party already, okay.

I just can't imagine the trauma that the wives and children of the seduced married male leaders have to endure....and that of the parents of the seduced handsome young men.

I think by now the leaders of PKR allies in Pakatan Harapan must be feeling a bit squeamish when ever they have meeting with Anwar and gang.

Therefore, really, a law against men seducing men is necessary.

Seriously, all those PKR gay stories are gross, okay.

What is more gross than a married man in his late 60s saying "Can I fuck you today?" to a man in his 20s?

Okay lah, I think if the PKR senator is too shy to propose such a law, then maybe someone from Pribumi Bersatu can do it.

Come on guys, help your PKR friends a bit, can or not?

I really pity Dr Mahathir for having to mix around with that bunch of people.

And he even had to promise to hand over this country to Anwar by as early as next year.