So, this is the latest on


“Dong Zong is racist; we set up a campus in Vision School to put a Sekolah Jenis Kebangsaan (SJK) Cina, a SJK Tamil and a sekolah kebangsaan (national school) in one campus, but they were against it.
“They are afraid to let their children mix with Malays, so they did not want it. They are against all (implemented by the government), never agreed with anything,”
Even the non-Chinese DAP who tried to bodek the Chinese for votes sudah kena from Dr Mahathir;


Meanwhile, commenting on a call by Klang MP Charles Santiago who wanted the power of the prime minister in making decisions curbed, Dr Mahathir cynically said he will refer to Charles before making any decision.
“In future, when making a decision, I will ask Charles Santiago; if he did not agree I will not make the decision. Of course, I have to obtain his view; he is on the same level as me,” he said.
Really haywire for DAP this one.

So DAP, you all want to throw out Dr Mahathir from Pakatan or not?

It's your Chinese support base or him, okay.

Guan Eng, you don't want to say the handsome old man has declared war against the Chinese ka?

As I previously wrote, the Chinese educationists will never back down on anything concerning the Chinese schools.

They will fight even the DAP over it.

And DAP know they can't fight these Dong Zong people as they will lose their all important undivided support of the Chinese community.

My bet is that DAP will push Dr Mahathir out, now that they realised that he is not going to be their puppet.

They will push Anwar up to be PM. They will have PKR and that Amanah lapdog to support them for it.

Anwar will give them everything they want as long as he can become the PM.

He will even lick Dong Zong if that's what DAP wanted in exchange for it to topple Dr Mahathir and give him the PM seat. 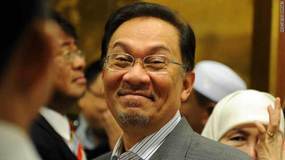 It's seriously moving towards that.

And what Dr Mahathir can do about it?

He can dissolves the parliament, and calls for general election.

If they think they can do without him, let them try to actually do that.

After that he can take a real rest somewhere. He's 94 after all.

Personally, I believe Pakatan will get massacred at the polls without Dr Mahathir.