Being fair to budget travelers

I totally support Dr Mahathir on this one,

“We are studying (the tax). Obviously, if you charge the passengers the same exit tax for high-cost flights and low-cost flights, it is not fair,” the Prime Minister told a press conference after visiting RedQ, the AirAsia’s headquarters, here yesterday,

I just hope the study and right decision on the matter could be done as quickly as possible.

Also, since that one was on the departure tax, Dr Mahathir needs to look into the equally unfair passenger service charge (PSC) too. 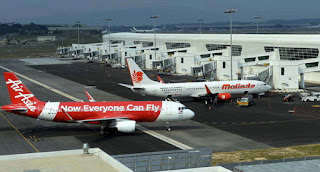 Guan Eng as the finance minister responsible in imposing those taxes needs to learn from this one.

Don't simply squeeze people just because you assumed that they don't mind being squeezed.

Simple common sense la that one.

Some more, you give them substandard airport and expect them to pay the same tax as those who get to use the proper airport. That's simply stupid or even being grossly negligent.

It's like forcing people to pay the same for pasar malam goods and those sold at posh malls.

So, hopefully Guan Eng and the rest of the not so bright Cabinet members will learn and get their thinking right.

Don't simply say or do bullshit things and expect people to swallow them just because you thought you can get away with anything.

Impose all kind of unfair taxes and then blame the previous government - that tactic wouldn't work anymore, okay.

Really, they must learn from Dr Mahathir on things like this.

Do the right thing for the country as a whole and not just for your party's voters support base.
Posted by Annie at 09:14