Someone pointed this story to me just now

Then I told him to read the whole story till the end and pay particular attention to these paragraphs,


At a meeting yesterday, the groups had signed a statement calling for the deferment of the decision to introduce khat in the Year 4 Bahasa Melayu syllabus in vernacular schools next year.
They had said it did not help Chinese and Tamil primary school students to increase their standard of Malay and that changes to the existing school syllabus should only be done by meeting the needs of each school stream.
It's as good as saying no to the whole thing, or at the very least, a strategic retreat.

They will continue to call for the deferment until the government gives up or until Dr Mahathir is no longer around.

There is no way the Chinese educationists will ever back down. That has been their stance for half a century.

If Dr Mahathir really forces them, they will campaign against Pakatan in the next general election. Pakatan can't survive if the Chinese votes are split even for a bit.

As for the FMT headline, it was just to accommodate the DAP and in a way to give face to Dr Mahathir.

It's too embarrassing if they were seen as failing to subdue the Chinese educationists AGAIN.

I'm really against forcing anyone doing things which were not really necessary.

That's why I'm against forcing students learning "khat" in school.

I really meant it when I said I'm

In support of Dong Zong and Jiao Zong

I think it's a stupid and an unnecessary move by the Education Ministry.

Why can't they use the resources for the "khat" classes to actually really improve students' knowledge of the national language?

Maybe it's for Pakatan to win over the Malays, but that's political and why do they have to burden the students for it like that? 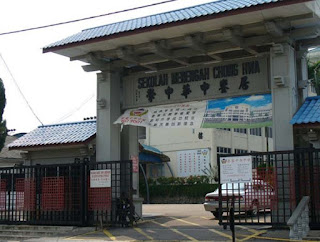 Anyway, I think it's going to backfire on them.

If we look back at the history of Dr Mahathir's career, the only group of opponents that he failed to subdue were the Chinese educationists.

He always came out worse after a fight with them.

for instance is a black mark of Dr Mahathir's first administration.

Its main trigger was this,


The immediate cause, however, was the Ministry of Education's decision to appoint some 100 senior assistants and supervisors to Chinese-medium primary schools.[8] Concerns were raised by Chinese politicians and organizations that those appointed were Chinese who were not Chinese-educated, implying that students and parents might be forced to use English or Malay to communicate with the school personnel. Chinese educationalist groups contended that the move would limit the usage of Chinese in these schools.
On 11 October 1987, a 2,000-strong gathering was held by the United Chinese School Committees Association of Malaysia (UCSCAM, the association of Chinese school teachers and trustees, also known as Dong Jiao Zong) at the Hainanese Association Building beside the Thean Hou Temple in Kuala Lumpur. It was joined by prominent politicians from Chinese-based parties such as MCA's Deputy President and Labour Minister Lee Kim Sai, the leader of Democratic Action Party (DAP) Lim Kit Siang, as well as representatives from GERAKAN and other parties. The meeting resolved to call a three-day boycott in Chinese schools if the government did not settle the appointments issue.[8] The boycott was called off at the eleventh hour to allow time for the government to resolve the issue, nevertheless 57 schools went ahead with the strike on 15 October, either because they did not receive the notice of postponement, or they disagreed with the decision.[9]

After that, Dr Mahathir attempted to introduce the Sekolah Wawasan concept which was to integrate Chinese schools into the mainstream. It was also thwarted by the Chinese educationists.

Then there's also the Suqiu memorandum controversy in 1999. At that time it was said that Dr Mahathir accepted the pledge of support from Chinese community leaders - many of whom were Chinese educationists - for the general election that year. In return, he was to fulfil their wishes should BN wins. BN did not even manage to win 40 per cent of Malay votes due to the Anwar's Reformasi movement at that time but was saved by the Chinese votes. Dr Mahathir however denied having promised anything to the Suqiu leaders. Just days before the
Lunas by-election
in November 2000, Dr Mahathir made a remark during a press conference in Alor Star likening the Suqiu leaders to communists and extremists. As a result, BN lost the by-election that it should have won after the Chinese voters switched to support the opposition because of the remark he made.

Now Dr Mahathir is having another round of confrontation with the Chinese educationists and I suspect that he may not come out of this one looking any good either.

After all, Pakatan still needs the full support of the Chinese community for the next general election.

No matter how much they hate BN and it's allies, the Chinese community may still prefer them than those who threaten their institutions - the Chinese schools being one of its most cherished.

I think DAP will be hard pressed on this one. We will just have to wait for it to announce its leadership's "collective stand" on the khat issue in the next few days.

DAP is after all not a great defender of Chinese schools, the same as their big brother PAP of Singapore which destroyed the Chinese school system in that republic to quash its opposition within the community.

Whatever it is, this is going to be a headache for them.

As for the BN supporters who have been whacking the Chinese community over this issue.....honestly, I don't understand them.

By right, they should be standing with the Chinese educationists on this one.

The enemy of our enemy is our friend.....something like that.

Well, maybe they were being too wrapped up with the idea of Perpaduan Ummah that they felt the need to whack anything that appears to be against it.

Actually, they should realise that Perpaduan Ummah is not about whacking other races who defended their rights.

It's about getting ourselves united and not about going after others, okay.

By the way, I also don't understand why we need to make everyone become like ourselves.

I never believe in forcing anyone to assimilate, or even integrate for that matter.

Why can't we be our unique selves and still be Malaysians?

Click on this link to my previous post in February 2014 to know what I think of the Bangsa Malaysia concept;