I think this is long overdue

Lynas will sue those who defame it

In recent weeks you may have seen a campaign of false information by anti-Lynas activists. We have always welcomed informed debate, however, the spreading of false allegations and misinformation is unacceptable. We cannot allow lies to stand unchallenged and we will not hesitate to take legal actions against those who persist in defaming our people and our company.
Yup, do sue them for millions of ringgit.

Previously, Lynas had been too nice and trying too hard being diplomatic.

The lies only got worse despite all the scientific evidence backing the company.

By now Lynas should know that those people who defamed it are devoid of reason and are only interested in gaining political mileage by lying to the people.

Now that they have become the government they are using their new-found power to enforce their lies on everyone, including their own leader PM Dr Mahathir.

They just can't take it that Dr Mahathir had decided that there's nothing wrong with Lynas and that the company's presence in this country actually helps Malaysia.

They became brave because they thought they can get away with their lies as no action was previously taken against them.

With Lynas now pledging to sue them, lets see whether they are still so brave to defame others.

Don't waste niceness on these people because they are not nice people. 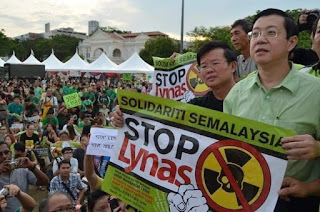 Next time they open their mouth and lies come out of it, sue them.

Bankrupt them if possible.

I'm quite sure Lynas can win such suits as they have all the facts on their side.

Let's start with this one;

Lynas does not consider the environment and


Sue the writer and the publication which published his article.

The publication tried to excuse itself by saying it's the writer's opinion and not its own but the fact that it published the article means it helps to spread the lies.

So, go all out okay. Don't be shy because these people never hesitate to sue others if they could do so.

Again, sue them for millions of ringgit and please don't settle the case out of court.

Don't compromise with these people.

They never care about the Lynas workers whose jobs they put at risk because of their political agenda.

After that lets see if the likes of Fuziah, Wong Tak etc dare to lie again about Lynas.

Lynas shouldn't worry about losing because its case would be based on scientific evidence and facts while those who defamed it were just playing on public sentiment to win votes.

In court, only evidence and facts matter, okay.

Also, I would like to see all those prominent Pribumi Bersatu bloggers and social media personalities defend their party chairman's stand on Lynas.

Here once again is Dr Mahathir's post, which defends Lynas;

8. As I understand it, the Lynas plant in Pahang does not involve activating any of the rare earth components to make them radioactive. The process cannot be harmful. As for the waste, it does not give off harmful radiation either. The waste is just ordinary earth which is normally mixed with the small amounts of rare earth. The necessity to export the waste does not arise.

Really guys, read this one by Rocky too for good measure


Dr M is right, someone IS undermining his
government's economic recovery efforts and it's ...

Also this one by Singapore's Straits Times;

KUALA LUMPUR - Malaysia will likely withdraw a demand for the controversial but highly strategic Lynas rare earth plant to export half a million tonnes of feared radioactive waste as a condition for renewing its licence, and instead direct it to build a permanent disposal facility (PDF) at the Australian miner's cost.

The Straits Times understands that the Cabinet discussed this proposed compromise earlier this month but is putting off an announcement.

The government had said previously it would announce its decision in mid-August before Lynas' licence expires on Sept 2.

The development came after the company's appeal hearing against the waste export directive on June 28.

Lynas mines rare earth minerals in Western Australia and processes them at its plant near Kuantan in Pahang.

Deciding on the PDF route would effectively allow Lynas to continue operations instead of being shuttered. It has said shipping out the 450,000 tonnes of water leach purification (WLP) residue from its plant by September was unachievable, but that it has been ready to build a PDF if required.

"Agreeing to the PDF as a condition will mean Lynas has to stump up a US$50 million (S$68.4 million) security deposit to finance the project. It is also dependent on Lynas locating a site and getting the necessary approvals," an official source told The Straits Times.

Building a PDF was recommended by a review panel in December.

She instead ordered the full export of waste from the US$800 million refinery as a prerequisite for licence renewal.

According to an agreement between the ousted Barisan Nasional (BN) in 2012 and Lynas, which produces about 12 per cent of global rare earth supply, waste export is a last resort if plans to recycle the waste fail and there is no option for safe disposal of stockpiled waste.

The firm's multimillion-dollar research into the use of WLP as fertiliser has been ongoing.

It is also investing in a pre-processing facility in Australia to decontaminate the ore before sending it to Malaysia, as part of an ambitious A$500 million (S$477 million) blueprint to expand operations by 2025.

Lynas noted in its quarterly report that Malaysia's deputy environment minister had told Parliament conditions for the renewal would be decided by Cabinet and announced in mid-August 2019.

This plan was unveiled after Prime Minister Mahathir Mohamad said in April that no country would accept radioactive residue and that rare earth refining could continue "if they promise that the raw material only comes here after the cracking and cleaning up".

China controls over 70 per cent of the world's production of rare earths and meets 80 per cent of the United States' demand. But the escalating trade war between the two superpowers has sent investors scurrying for alternative sources of the material which is crucial in high-technology electronics and defence applications.

The PDF requirement would not just be a compromise between the government and Lynas, but also among Pakatan Harapan (PH) leaders who are divided over the refinery that has faced years of pressure over alleged radioactivity and pollution.

Experts, including those in the government review committee, disagree on the level of radiation from the WLP piled up on the east coast of Pahang.

Speaking at the Nikkei business conference in Japan in May, Tun Dr Mahathir said "we will allow Lynas to carry on, otherwise we are going to lose a very big investment from Australia".

Ms Yeo, however, insisted later the same day that licensing conditions still applied and that Dr Mahathir's position is "Lynas has to ship out its waste".

On July 9, her deputy minister Isnaraissah Munirah Majilis told Parliament "we still need a few inputs before we make a decision... to be announced in mid-August 2019".

Entrepreneurial Development Minister Redzuan Yusof said the next day that Malaysia could attract investments of up to RM100 billion (S$33 billion) in the rare earth sector over the next decade, once the government gives the market clarity over its stance on the sector.

Eighty-eight civil society groups have petitioned the government not to renew Lynas' licence, and asked to meet Dr Mahathir before a decision is made, saying it is unfair that the premier has not given them the same courtesy as accorded to the company's top brass.

"I believe the truth never got to the government," said Save Malaysia Stop Lynas chairman Tan Bun Teet on July 21.

https://www.straitstimes.com/asia/se-asia/malaysia-set-to-withdraw-export-demand-of-lynas-rare-earth-waste
Posted by Annie at 09:19