This story from Fukuoka, Japan

because investors are watching


should be titled "Final nail in the anti-Lynas coffin".

1 - Prime Minister Tun Dr. Mahathir Mohamad pointed to studies by experts that indicate that what Lynas produces is very low-level radioactive waste and not hazardous to health and he believes there is a way to further reduce the low-level radioactivity.

Yup, Dr Mahathir is sticking to his belief which he wrote in his blog in May 2012 and this time he was supported by the findings of the review committee appointed by the Pakatan government last year.


excerpts;
8. As I understand it, the Lynas plant in Pahang does not involve activating any of the rare earth components to make them radioactive. The process cannot be harmful. As for the waste, it does not give off harmful radiation either. The waste is just ordinary earth which is normally mixed with the small amounts of rare earth. The necessity to export the waste does not arise.

And yes, Dr Mahathir's stand on the issue confirms that the anti-Lynas movement, led by DAP and PKR, was just based on lies.... 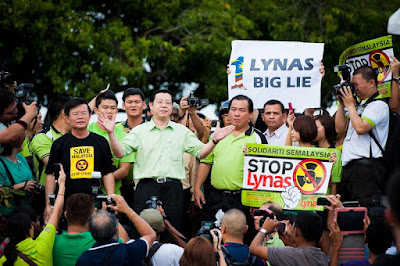 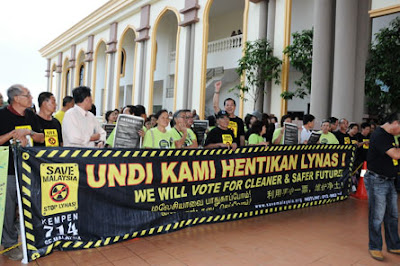 ....and spins....dramatic one at that. Just look at the faces of those liars.


My salute to Dr Mahathir for putting the interest of Malaysia ahead of the political interest of these liars, even though they are his allies in Pakatan.

Well, if he can turned against Umno and BN, of course he can do the same to these people whom he knew were lying about Lynas from back then when he wrote that post in support of Lynas in 2012.

Do also take note that Dr Mahathir had made all his most important statements on Lynas in Japan which depends heavily on the company to ensure its supply of rare-earth will not be threatened by China which control about 80 per cent of the mineral supply.

Lynas is the only significant supplier of rare-earth outside China and shutting it down would give China absolute monopoly of the mineral which is crucial in the production of IT components and operations of other high-tech industries.

Lynas actually holds the key to the survivability of the Western world in its conflict with China, such as the current trade war, and it's located in Malaysia.

I believe that Dr Mahathir knows the strategic importance that Lynas has gave to the country and that's why he rather brushed aside the demands of the anti-Lynas leaders from DAP and PKR, who only care about where their next votes will come from.

For a better understanding of Lynas' significance, I'm putting in full this article by South China Morning Post which was published on Thursday;

The Association of China Rare Earth Industry, which represents almost 300 miners, processors and manufacturers, issued a statement yesterday, citing an Aug 5 meeting.
“US consumers must shoulder the cost from US-imposed tariffs,” the association said.
China’s rare earth producers, who control the lion’s share of the world’s output of the elements, said they are ready to use their dominance of the industry as a weapon in the country’s year-long trade war with their customers in the United States.
Chinese producers will pass any tariffs on their exports to customers, in a move that would almost certainly add to the cost of the magnets, motors, light-emitting diodes and hundreds of other devices, according to an industry guild that represents almost 300 miners, processors and manufacturers of rare earth-based products.
The industry “resolutely supports the nation’s counter measures against US import tariffs on Chinese products,” the Association of China Rare Earth Industry said in a statement yesterday citing the consensus from an Aug 5 meeting. “US consumers must shoulder the costs from US-imposed tariffs.”
The statement by the state-dominated industry is the clearest sign that China is ready to turn its rare earth deposits into a trade weapon, after a year of negotiations to untangle a complex web of tit-for-tat tariffs ended in impasse.
US President Donald Trump upped the ante on Aug 1, when he tweeted he would slap a 10% tariff on US$300 billion of Chinese products effective Sept 1, excluding rare earths.
China produces over 80% of the world’s rare earths, and a major portion of processed products that are found in most smartphones, electric vehicles, wind turbines and military equipment from radars to sensors.
The US imports most of the rare earths it uses from China. Washington DC last year put Chinese rare earth materials on its proposed product list for tariffs but later took them out.
This isn’t the first attempt by Chinese producers to turn their industry dominance into a trade or diplomatic weapon.
China banned exports to Japan after a 2010 territorial dispute, which resulted in a complaint to the World Trade Organisation (WTO) and a push by Japanese industry to develop substitutes and alternatives, ultimately hurting Chinese producers.
“The second round of nationwide environmental compliance inspection has already started, posing a big test for miners and processors,” Citic Securities chief cyclical industries analyst Ao Chung said in a report on Monday.
“The rise in compliance costs could further squeeze out non-compliant capacities, tightening rare earth supply.”
This could result in higher product prices, benefiting companies that are in compliance, Chung noted, adding the prospect of more US tariffs raises the urgency of more policies favourable to the rare earth industry.
The statement by the rare earth guild weighed on the stock prices of producers, even as the China and Hong Kong equity markets advanced amid stronger trade data.
China Rare Earth Holdings fell by as much as 3.6% in an advancing market to HK$0.53 in Hong Kong. China Minmetals Rare Earth fell by as much as 5.7% in Shenzhen to 14.80 yuan, while China Northern Rare Earth Group (600111 CH) declined 3.9% to 11.83 yuan in Shanghai.
In view of the trade war with the US, Chinese producers should also diversify their exports and actively participate in opportunities stemming from Beijing’s Belt and Road Initiative, the industry guild said.
The BRI aims to foster closer economic partnerships with Southeast, South and Central Asia, the Middle East, Africa and Europe, initially through infrastructure construction.
The industry body emphasised that its members need to continue to push for “supply side structural reform and better serve the domestic market” so as to maintain China’s lead in the global rare earth industry.
The reform refers to the elimination of inefficient, outdated and environmentally damaging mining and processing methods.
To make it easier to achieve this, Beijing in recent years has forced the previously-fragmented industry to consolidate into six groups, led by state-owned companies.
Posted by Annie at 10:06