As I previously wrote, the Chinese educationists are indeed

This is the final Cabinet's decision

No khat, Jawi in national-type

schools only if PTA agree

The handsome old man, as I also pointed previously, never came out looking good after a fight with the Dong Zong gang. 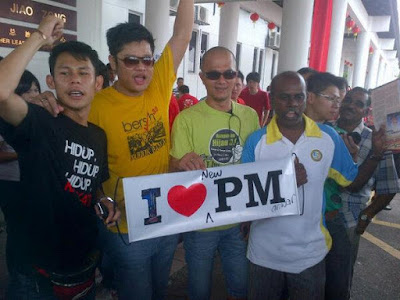 And now we also know who is the real boss in Pakatan Harapan.

DAP leaders can now once again be the Chinese heroes.

Well, good for them.

As for Pribumi Bersatu, all their talks about being the defenders of everything Malay and Islamic in Pakatan Harapan were just talks.

Okay, some Malays may think otherwise, but they are definitely not the majority.

Anyway, I told you all that I was with the Dong Zong gang on this - the khat thing was stupid in the first place.

For another point of view about the whole nonsense, read this


“Basically, we are going back to the same 2Rs of race and religion to capture the voters’ imagination,” he said, adding that PH is aware that they need as much support as they can from the Malays in order to retain power.
“PH knows that without winning over the Malay votes from PAS and Umno, they will lose the government and the next GE15 results will not be in their favour. Thus, their seats in Putrajaya are as good as gone,” he opined.
Ti said Dr Mahathir’s recent attack against Dong Zong is the same strategy he employed after the general election in 1999 when “he lost the Malay popular support.”
For me, if that's the ploy, then it has backfired on Dr Mahathir quite badly.

Whatever it is, I still think DAP will get everyone in Pakatan to push Dr Mahathir out of the PM office by May next year and replace him with Anwar.

They can't afford Dr Mahathir pulling another stunt like the khat issue which could damage their absolute monopoly of the Chinese votes.

I believe that they rather not have any Malay vote at all as long as they can keep their support base intact.
Posted by Annie at 12:43