Guys, we may not have much money for next year (updated)

They have this today

for rally over khat


These are a bunch of really stupid people.

The type of racists who call others racists.

And they are planning more

Tomorrow's rally is expected to be larger and will address issues such as the unilateral conversion of non-Muslim minors to Islam, the ongoing presence in Malaysia of controversial preacher Zakir Naik, the distribution and alleged misappropriation of funds allocated to the Malaysian Indian Transformation Unit (Mitra), the issue of statelessness and citizenship in the Indian community  as well to continue the khat lessons protest.

As if we don't have enough trouble in this era of Malaysia Baru.

Well, guys, while most of us are currently so concerned about all those nonsense such as politicians implicated with rape, gay sex, khat lesson in schools, inverted Jalur gemilang etc, I received this message yesterday from a foreigner friend with business interests in this country, 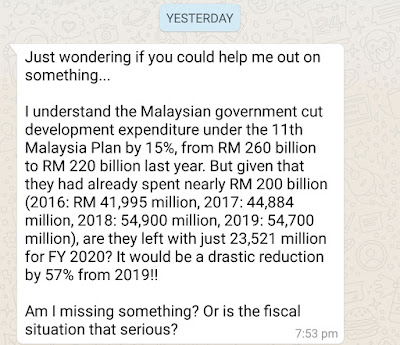 I'm not sharing my answer to my friend here because I don't want to be accused of spinning.

You all be the judge of this yourselves.

My friend asked those questions based on this story by The Edge in October last year which I'm publishing here in full,

Govt to cut development expenditure by 15% to RM220b under 11MP

KUALA LUMPUR (Oct 18): The development expenditure ceiling will be cut by RM40 billion or 15% to RM220 billion from the original allocation of RM260 billion under the 11th Malaysia Plan (2016-2020), as part of plans to consolidate the country's fiscal position.
This is necessary, taking into account lower government revenue, no thanks to volatile global crude oil prices during the review period and the abolishment of the goods and services tax in September this year.
"Public investment will focus on strengthening public infrastructure and developing economic enablers," said the Mid-Term Review of the 11th Malaysia Plan (2016-2020) released today.
The review said the focus will be given priority to the people-centric projects. With that, over 4,000 ongoing projects will still be continued across the nation including the building of affordable houses, schools, hospitals and roads.
During the review period, only RM92 billion was allocated for development expenditure, lower than the original target in both nominal and real terms.
Moreover, the disbursement recorded a shortfall, where 94.4% of total allocation or RM86.9 billion was expended. This shortfall was mainly due to delays in securing land and finalisation of project design despite initiatives to further improve the project management process.
These initiatives include the introduction of a cost-benefit index for project selection and the continuation of compulsory value management process for projects valued above RM50 million.
According to the review, development expenditure continued to be financed mainly through debt as current account balance was insufficient.
Although the level of federal government debt rose with the continuous fiscal deficit, debt as a percentage to nominal gross domestic product reduced from 54.5% in 2015 to 50.8% in 2017.
However, this level of debt excluded contingent liabilities as well as future commitment of payments for projects carried out through public-private partnerships.
Posted by Annie at 12:56