I read with great interest this latest posting by Datuk Kadir Jasin, who is the Prime Minister's media adviser

I totally agree with him.

MAHB must answer for that terrible mess at KLIA.

Just recently I complained about this matter.

These are previous posts of mine,


Interestingly, Datuk Kadir in his post mentioned about MAHB's near monopoly of Malaysian airports.


Speaking of rocks, this incident could put MAHB’s monopoly of the country’s airport industry on a rocky road. There are bound to be challenges to its hegemony.

With 39 airports in the country under its belt, MAHB could have been fed (or bitten) more that it could chew.

I don't know about you all but I think these paragraphs could well scare the MAHB people a bit.

And Datuk Kadir also wrote about his pleasant experience at the Johor's Senai Airport, which is the only major airport in Malaysia not managed by MAHB.


I was rather apprehensive when the government privatised Senai International Airport in Johor to MMC Corporation Berhad back in 2009.

I had not used the airport since then but last Saturday I flew in and out of it for a brief visit to Johor Bahru. I must say that my impression of the privatised Senai is positive.

The airport looks more like a shopping mall than a drab brick and mortar airport. Last year it was listed as the fifth busiest after KLIA, Kota Kinabalu, Penang and Kuching. It handled 3.5 million passengers. 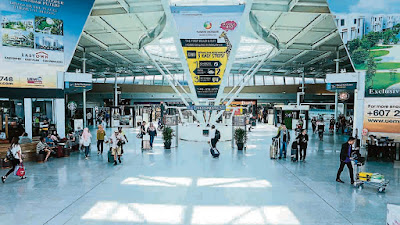 For those who don't know yet, Senai airport is managed by Senai Airport Terminal Services Sdn Bhd, which is a subsidiary of MMC Corporation Bhd.

MMC is one of those many huge corporations under the control of Tan Sri Syed Mokhtar AlBukhary.

So, I believe you know where this is going, right?

Will Syed Mokhtar be enrolled to provide a competition for MAHB, which keeps experiencing "system failures" or even to take over the whole thing?

After all, Datuk Kadir who hinted this with his posting is very close to Dr Mahathir.

So, there should be something going on.

If you ask me, I think if the guy can provide competition to improve things or even do a better job, then why not, right?
Posted by Annie at 07:12