Truth will prevail, one way or another

This is an interesting development of the Adib inquest,

What did they say at the inquest?


Adib was not pulled out of van


Based on what they said at the inquest, I think I know who are the two who made the police reports and who is the one allegedly had threatened those two.

This reminds me of this story;


excerpts;
Siti Syafika Amira had in her FB account under the name “Cik Miera” posted her opinion that the fireman's death was not caused by an accident but was due to assault. However the comment was subsequently deleted.

The nurse, who was the 25th witness to testify, also apologised to the doctor who she had referred to in the comment. 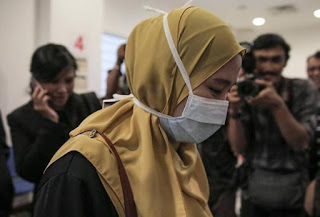 I wonder whether she was pressured to retract her posting and apologise, just like those two experts who lodged their police reports. I tend to believe that she was pressured, This is the story before the nurse did so,


I have actually given up on the inquest to deliver justice for Adib and his loved ones after those earlier nonsense.

I still don't expect anything from it even after the police reports by the experts. For me, that was just a way by Allah to show us what truly happened despite all the lies and manipulations to make us believe otherwise.

As I posted previously, now I just pray that

Allah will give justice to Adib and his loved ones

I feel no anger anymore over what happened to Adib as I have accepted it as being fated.

Now the most that I feel over the whole thing is contempt for those who caused his death and people who tried to cook up excuses for what they did to Adib.
Posted by Annie at 13:16