The only place where PH won was at Bandar Ekar.

This is BN's third consecutive victory after Cameron Highlands and Semenyih. A clear sign that the tide is really turning.

Congratulations to BN and Mat Hasan in particular.

I'm quite sure there will be more all the way to the next general election.

I arrived in Rantau a bit late today.

The GPS told me to go through an alternative route exiting the Elite Highway at KLIA and I have to go through a winding trunk road to Lukut. From there it was another 20 minutes to Rantau.

When I arrived at the outskirts of Rantau town just before noon, the road was choked with vehicles.

Stopped at a warung for lunch before taking a walk around Rantau town.

Everything was fine and the polling process seemed smooth as I observed at Sek Keb Datuk Akhir Zaman.

I rested for a while at the MCA operation centre as it was very hot at that time. This time I have a bottle of 100 Plus. I even bought some very sweet "Indian candy" at a nearby stall just in case I need some extra sugar intake. 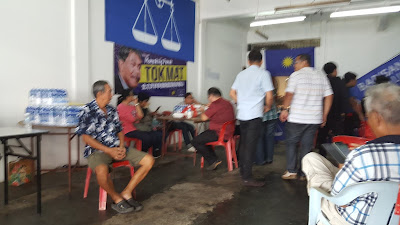 The MCA people were nice to me.

I talked to one of the party workers and asked about BN's chances and she said it's 50-50.

She said she would be happy if BN can get even just 10 per cent of the Chinese votes.

"But we have to continue to tell them that there must be a check and balance for the government," she added.

I'm now taking a rest at a hotel in Seremban.

Will go back to Rantau before the counting of votes begins.

I will update this post once the result of the by-election has been announced.
Posted by Annie at 16:06