Previously, before the campaign started, I spent


and yesterday, I was there again.

Just a day trip to see how's the campaigning so far.

I even managed to be at a function in Sendayan attended by Pakatan candidate Dr S.Streram.

It was the opening of a pasar malam, supposedly by the Negeri Sembilan MB.

However, the guy, who is from PKR didn't turn up and he instead just sent a representative. Quite weird I think because it was part of the Pakatan campaign. He should give more importance to it.

Anyway, I honestly think that this Streram is no match for Mat Hasan at all. 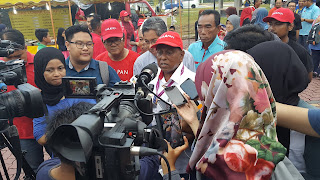 If I'm a Pakatan supporter, I believe I would be very depressed watching him. He can't even speak Bahasa Malaysia properly and is almost as bad as the Pakatan candidate in Cameron Highlands.

But then again, this is Malaysia Baru and maybe the Pakatan leadership, in particular Anwar still believed that they can win even if they put a banana tree as their candidate.

Yes, that despite what happened in Cameron Highlands and Semenyih.

Well, maybe they still believed that they can get all the non-Malay votes and at least 20 per cent of the Malays. Malays made up just 53 per cent of the voters in Rantau.

Okay, maybe Pakatan can get all the Chinese votes which made up about 17 per cent of the total votes.

I was informed that KJ who won the Rembau parliamentary constituency, which Rantau is a part of, hardly received any vote from among the Chinese during GE14 last year.

But still, I don't think Pakatan can get all the Indian votes as KJ did get some of them back then.

Then I was also told by the locals that Mat Hasan has always been very popular among many of the Indians in Rantau.

I believe this is true because on my first visit there, I stopped at his service centre and the majority of people seeking assistance from him that day were Indians.

He is after all known to be a very good wakil rakyat who cares for all his constituents.

Whatever it is, I found that Mat Hasan and his people appeared to be very careful about not being over-confident.

They were campaigning diligently and so far have not done any mistake.

The BN machinery appeared to be working very well too. Special mention should be for the Wanita Umno team as I think they were the most hardworking and efficient among the lot.

Another notable thing about the BN campaign is that it being spearheaded by locals, which I think is the best way to do it.

This is not so with Pakatan as their campaign workers appeared to be made up of mostly outsiders. For one thing, I don't think those ladies in red Pakatan t-shirt I saw at a mamak restaurant yesterday were Rantau folks. Some of them have their hair dyed a bit blonde.

Still, we can never say for certain how it's going to be on polling day.

But at this stage, I think Mat Hasan will win the Rantau seat for BN....unless of course if there is something very wrong with the people there.

I will go there again next week to see how things are before the final push to polling day.

This is a Mat Hasan's ceramah;