The Johor headache of Dr Mahathir


I asked these questions

- Why no one send the MB candidate name/names to the Johor palace? Remember, Muhyiddin did so after the general election last year. Why was the convention broken?

- Why did the Johor palace immediately accept Dr Sahruddin as the new MB? It was all so smooth and in fact very quickly done. If it's a war, I would like to call it the Johor blitzkrieg. Very brilliant, actually. Also bear in mind that the palace insisted that the new MB will be loyal to Johor.- Why was Osman Sapian not distressed by much after he was removed from his MB post? Really. The guy went on almost as usual after Dr Mahathir announced his resignation. As a friend at Kota Iskandar said to me "MB selamba rock je".- Who is Dr Sahruddin in Johor Pribumi Bersatu? Which camp does he belongs to? Who is his mentor? Who quarreled with Muhyiddin to get him fielded in Bukit Kepong during GE14? Why do the Johor DAP people like him?

At the end of the post, I asked you all to

Watch out for what's going to happen to Mazlan Bujang in the coming Johor exco reshuffle.

Well, the young and idealistic Mazlan was dropped from the exco line-up and I think you all now know the answers to all my questions.

These are FMT reports over the past 48 hours,


The meeting, which a source describes as “very heated and tense”, was called at short notice on the back of concerns that the new line-up was never approved by PPBM.
They also demanded newly appointed Johor Menteri Besar Dr Sahruddin Jamal to explain why he ignored a decision “made at the very top” that there was no need for a reshuffle of the state line-up.
“But the MB went ahead with the reshuffle although he was informed of the Cabinet stand during his meeting with the prime minister prior to his swearing-in,” the source said.
FMT has also learnt that Sahruddin’s action was heavily criticised by Mahathir.
The source said many had during the meeting questioned the move to “kowtow to invisible hands” in the selection of the Johor exco line-up.

after open spat with Johor palace


A source said Sahruddin was not the only leader who upset Mahathir, especially as the prime minister is involved in a sensitive spat with the palace over who calls the shots in matters of state governance in Johor, a state that has long grappled with jurisdictional issues involving the palace.
The spat came on the heels of the Johor palace’s vocal opposition to Putrajaya’s move to ratify the Rome Statute, over claims that the treaty could harm the royal institution.
Mahathir was forced to withdraw from the treaty. Several public remarks followed, jogging Malaysians’ memory of the 1993 constitutional crisis that ended with the Malay rulers losing their immunity from criminal charges.
The prime minister later lamented how the amendment was not fully utilised to strengthen democracy and justice, pointing out that the special court had hardly been used since.
That, and the latest snub from one or two of his trusted men in the PPBM leadership over the Johor episode, must have upset the 94-year-old leader. 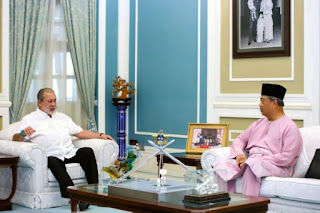 Meanwhile, it's quite clear from his latest blog posting that Dr Mahathir is indeed unhappy as far as this Johor matter is concerned;

Personally, I prefer the Malays' way of handling relations with the Raja-Raja Melayu such as in this instance which led to our country's independence;

That's what my father used to say to me.

Whatever it is, as I always wrote in this blog, handling Johor is not easy.

His successors have not been doing very well....including the new one, I believe.

I sincerely pity Dr Mahathir for having to manage the nonsense at his advanced age.