When a friend asked me yesterday what I think of the new Johor MB, Dr Sahruddin Jamal, I can't help but to blurt this out;

"Another one term MB, the most." 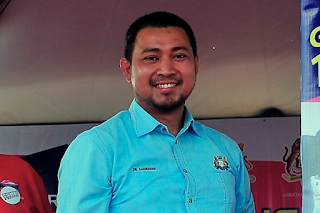 Well, actually the guy is not even going to be a one term MB because he took over from Osman Sapian in mid-term.

But never mind that as I just want to emphasis my belief that he's not likely going to survive another election at his constituency of Bukit Kepong.

This is the result of Bukit Kepong state constituency during the 14th general election last year ;

With BN, in particular Umno on the march again now, combined with their cooperation with Pas, constituencies such as Bukit Kepong, with almost 70 per cent Malay voters, are almost certain not going to be safe places for Pakatan candidates.

If BN had combined with Pas last year in Bukit Kepong the way they are now, Dr Sharuddin would not have won his seat.

Well, maybe Pakatan will move Dr Sahruddin to a Chinese majority area for the next election to save their MB.

Yup, that's despite him being a Pribumi Bersatu guy, who is supposed to win over the Malays.

But that's all in the future.

As for now, Dr Sahruddin needs to survive as MB longer than Osman Sapian's 11 months.

Otherwise, it's going to be super difficult for the current Johor Pakatan establishment.

Actually, I don't know much about the guy except for what I was told by my sources in JB.

They told me that he's rather quiet, blur blur a bit but seemed to be enthusiastic about his work.

He was said to have done well in managing the Sungai Kim Kim issue, particularly in communicating with the stakeholders on what were being done to handle the issue.

The guy is a doctor who used to run a GP clinic....you know, the type where you go to if you are not feeling very well and need an MC. He's a graduate of some sort of a university in Indonesia.....errr, are doctors from Indonesia any good? Maybe they are.

Still, overall, the guy sounds decent enough to me.

But then again, to be a Johor MB, being just decent may not be good enough.

One must have a vision of what should be done to further improve the state and at the same time command the respect of all quarters in Johor.

I'm not sure if this Dr Sahruddin, at 43 have enough experience and clout for all that.

Even the sacked Osman Sapian has three terms as state assemblyman before becoming MB. And he is quite senior compared to the other Pakatan leaders in Johor.

And of course there's that big question of whether this new MB can manage the difficult relations of Kota Iskandar-Johor Palace-Putrajaya.

Honestly, I don't envy this Dr Sahruddin. Trust me, this is going to be the most difficult one for the guy.

He may ends up being squished in the middle.

But then again, who knows, the guy may prove himself to be a superman....mild mannered doctor in daytime, superhero at night.....something like that.

Of course Dr Mahathir has another option - he can turn the Johor MB post into a disposable MB post. He can change the guy less than a year from now like Osman if the young doctor fails to satisfy him.

The same with the next one. I think Pribumi Bersatu have enough assemblymen in Johor for that till the next general election.

Oh, by the way, in case you all forget, I was right when I wrote this a day after the general election last year,

Osman, who won in Kempas is not going to be a good Johor MB.Really.If you all don't believe me, please double check with others who know Johor politics.

Obviously, they didn't bother to check and ended up taking almost a year to realise it. Sigh.

Well, I actually have a bad feeling about this new MB too, but I rather let it be.

I'm not going to give free advice to Pakatan on this matter anymore. Wasting time only.
Posted by Annie at 17:24