Allah will give justice to Adib and his loved ones

Several of my friends had expressed anger over what was happening at the inquest of arwah Adib.

They believe that there will be no justice for the deceased fireman and his loved ones as according to them the inquest is heading towards this narrative;


I told my friends to calm down and stop being foolish.

They were hoping for justice from the wrong place.

For me, I never expect the inquest to deliver justice from the very start and that's why I didn't write anything about it.

Why do they need such an inquest for this case after all?

As a Muslim, at the moment I believe only Allah can give justice to Adib and his loved ones.

I told my angry friends to just pray for Allah to deliver that justice.

Man-made laws, inquests or whatever can never deny justice from Allah.

In case we forget, this was what happened that night,


If the inquest wants to rule that these damages to the fire engine was because it hit Adib, let it does so; 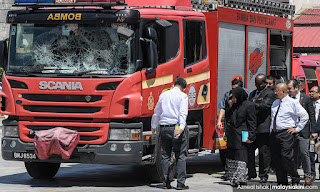 Maybe after that they will get the IGP to apologise and retract this statement of his,

When asked if it was confirmed Adib had been assaulted, he replied: “If he was not assaulted, how would he be in such a critical condition with so much injuries on him?”

Whatever it is, as a Muslim, I believe that Adib is resting in a better place now and will be placed in jannah in the afterlife. As for those who caused his death and deny him justice in this world, they will rot in hell for eternity. This I believe with all of my heart.
Posted by Annie at 07:13