A day in Rantau

It was a very hot afternoon in Rantau yesterday.

Yup, I went and spent the whole day there. Woke up in the morning and just decided to have a look at the place.

It's a typical small town with rows of shophouses along the main trunk road and villages as well as oil palm estates in the surrounding area.

Arrived there around noon and had lunch at a stall. Rice, mackerel masak lemak cili padi, fried bean sprouts, sambal belacan and teh O ice for RM5. Really not bad.

I asked the makcik who ran the stall about the coming by-election and she said things are not hotting up yet.

I laughed too as I didn't expect her to answer the question.

I think I know what she meant, but I rather leave it at that.

I drove around a bit after that and noticed that everything seemed to be in place. The infra of the place looked good.

I even noticed a rather new fire station by the roadside, which is not bad considering the small size of the town.

Then I decided to check out the kampung house of Mat Hassan, the Umno deputy president who is going to be the BN candidate for the by-election.

The makcik at the stall had earlier told me how to get there. Everyone at the town seemed very familiar with Mat Hassan, who is the incumbent assemblyman there.

It was a bit troublesome to get to Mat Hassan's house yesterday as they were repairing the road in front of it.

The original small wooden structure, which is typical of Malay traditional kampung houses of Negeri Sembilan is still there. It looked very nice in front of the normal modern-looking part behind it.

They had erected a huge tent behind the house and I was told by local BN people later that the place will be the coalition's command centre for the by-election.

I then decided to visit Mat Hassan's community service centre in the town, which is about two km away.

There was already a crowd there as it turned out that Mat Hassan almost always would be at the service centre in late afternoon to personally attend to his constituents' problems.

The kind of help he gave ranged from providing financial assistance for the needy to easing the bureaucracies for those dealing with government agencies on matters such as applications for land titles.

I was also pleasantly surprised to meet a journalist friend who was there with his team from KL to try get an interview with Mat Hassan.

Mat Hassan arrived from KL about 4.30pm. I was told that he had earlier been at the parliament as an observer.  My friend was given a slot to see him after he had done with attending to his constituents.

I  went to a nearby cendol stall for a drink as my friend and his team waited for their turn to see Mat Hassan.

Unfortunately for him, Mat Hassan declined to be interviewed as he was not feeling very well. My friend only managed to chat a bit with him and even that was off-the-record.

Despite having waited for hours, my friend seemed okay with it as he really likes Mat Hassan.

"Tok Mat really looked tired and he is fasting today,' said my friend.

He, nonetheless managed to get some pictures of Mat Hassan attending to his constituents who were there asking for his assistance.

He gave me some of those pictures and that of the Rantau town as he knows I'm not good with a camera, 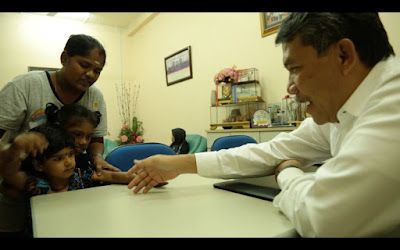 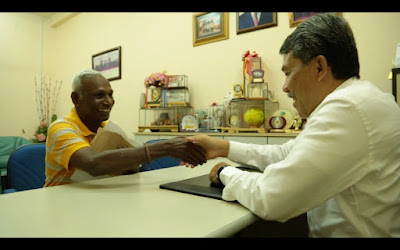 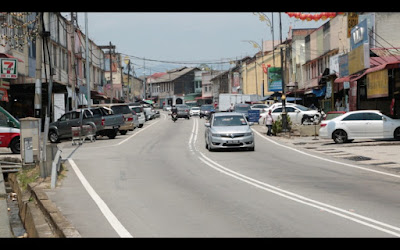 And these are pictures which I took myself yesterday,

My friend said he will try again to get a proper interview with Mat Hassan before the by-election. Hopefully he'll get it.
Posted by Annie at 15:47