Re-gazetting Pulau Kukup and others, Yeo Bee Yin and gang should support

This is the latest that I found on Pulau Kukup just now,


Well, I have a feeling that this is going to be another round of Dr Mahathir versus the Johor palace.


But I guess that's not reassuring enough for a lot of people because the island will remain a Sultanate Land, which means it belongs to the Sultan.

Some people think that today, after all the pressure, the Sultan may want the island to remain a national park, but tomorrow he might decide otherwise.

The island now is his after all.

And how about the other national park areas in Johor?

If I'm not mistaken, the Tunku Mahkota Johor had said that those are also now Sultanate Land.

Other than those, I was also wondering how come the land was de-gazetted without going through the state assembly.

Why was it done quietly?

The Pakatan state government had tried to blame it on its BN predecessor but for that, I had discussed at this previous post,


Well, if Dr Mahathir really must insist on this issue, he should go all the way and force Osman Sapian as Johor MB to take back Pulau Kukup and the other national park areas in Johor from the Sultan.

Johor Pakatan government must re-gazette back the land to what it used to be.

That's the only way to make Pulau Kukup and the other national park areas safe.

They must belong to the rakyat and no one else.

All the famous and influential Pakatan bloggers must champion the take back of the land from the Sultan and give it back to the rakyat.

Castigating Osman and removing him from the MB post over the issue would not be enough as that could be seen as mere internal politicking. 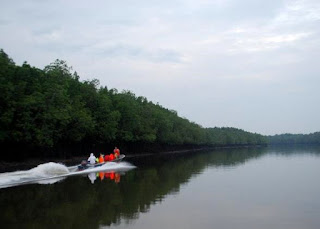 Meanwhile, I was wondering how come the minister in charge of environment Yeo Bee Yin has yet to say anything over issue which involves the potential destruction of three Ramsar sites.

I googled "Yeo Bee Yin Ramsar" and at the top of the search is this,


I'm not sure how the hell that happened.

Anyway, it so happened that the minister is the MP of Bakri in Muar, Johor.

Surely she must have known something of what's going on in her own state.

Don't tell me, she's the same level as Osman and have the same excuse- "Oh, I was surprised. I don't know about it. It's BN's fault."

She should be pushing for Pulau Kukup and the other national park areas in her state to be re-gazetted back to what it used to be.

That would be better than doing nonsense such as twisting the findings of the committee that her own government set-up for the Lynas issue to suit her political agenda. (More of that later.)

And how about the other Pakatan environmentalist politicians?

Fuziah and Wong Tack should be making noises about this too.

So far, I have not heard anything from them.

Don't they want to save the environment like they do over the Lynas issue?

Ya, Fuziah should do another drama like swimming while crying around Pulau Kukup or something.

Or were all those nonsense over Lynas just for politics?

Sigh....and their supporters called me a hypocrite.