His latest on Jho Low yesterday was a bit of a mess. 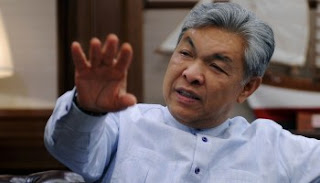 I typed "Jho Low" at Google news just now and these are what I got at the top of the page;

Shameful of Malaysia to close case against Jho Low, say Pakatan ...
The Malaysian Insight-4 hours ago


Seriously, with those kind of headlines, I'm not so sure anymore now what this Jho Low character is really all about.

Unless, I got it wrong, Jho Low was supposed to be a main character in the 1MDB issue.

Even some top pro-government blogggers said so before this.

If he is truly so, in my opinion, we shouldn't say that we don't want to know what the guy have to say about the mess.

At the very least, if Zahid had wanted to tell people that we are no longer interested to know what Jho Low have to say, he should further explain why and how we came to that conclusion.

That way, we wouldn't end up wondering what's really happening and media outlets such as those above would not come up with stories which made the whole thing even more convoluted.

I'm of the opinion that Zahid's media team should have advised him better on this.

They should have prepared their boss with the proper ways to answer such things even before the opposition people ask him such funny questions.

The last time I checked on the team, I was told that it was being beefed up with several people whom I knew to be really good at these sorts of things.

I now wonder whether they really took in those people.

Based on what happened yesterday, I think they didn't.

Maybe it was vetoed by people who were more interested in protecting their own turf in Zahid's camp.

Those people may had felt threatened as they were not so smart themselves.

Maybe that's why the team is still not functioning very well as evident in what happened to yesterday's statement on Jho Low.

Well, if that's the case, then it's just too bad for Zahid.

Being surrounded by mediocre people is not a good thing.

I really think he needs to get more smart media advisers.

It could save him from being turned into a joke by Pakatan people such as this,

These sorts of things are real causes of grief for Umno leaders these days.

When everything seems well for them, a simple handling of a statement was botched, making them look less intelligent that they really were.

Get la Datuk Tiger to bring them in, okay.