Dr Mahathir will be helping Umno if he goes to Putrajaya

How do I change my voting location to Putrajaya?

So, I searched for the story and here it is from NST,


By SOO WERN JUN - October 5, 2017 @ 12:54am
PETALING JAYA: Parti Pribumi Bersatu Malaysia (PPBM) chairman Tun Dr Mahathir Mohamad said it is a possibility that he may contest in Putrajaya in the coming general election.
Dr Mahathir said, “Yes, maybe I will stand in Putrajaya. You can tell them that I may contest.”
He was reponding to reporters today when asked on reports of him contesting in Putrajaya, at the PPBM headquarters.
Since last year, there have been calls for him to contest in the election, including from Parti Amanah Negara which had proposed that he stand in Putrajaya.
Dr Mahathir, who is also Pakatan Harapan chairman, had said recently that Langkawi or Putrajaya would be his preferred choice.
While both Langkawi and Putrajaya hold special significance for Dr Mahathir, both the constituencies are currently held by Barisan Nasional.
Putrajaya member of parliament is Datuk Seri Tengku Adnan Tengku Mansor, who is also Federal Territories Minister.

Suddenly, for the first time, and I thought it would never happen, I felt pity for Ku Nan. 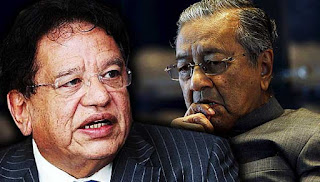 The guy surely can't sleep well after this.

Well, if Dr Mahathir really contest Putrajaya, then I think he will win.

Actually, in a way, I think he will be helping Umno by doing that.

My opinion is that, Ku Nan is bad for Umno's image and Dr Mahathir is going to help the party get rid of him.

Okay la, both have merits.

Only that it would be more exciting if he contests JB as it would be a tough fight against Shahrir.

Against Ku Nan, I think it it will be a walkover.