With this news, I think it's almost certain now that TS Shahrir Samad will defend his JB seat in the next general election,


Shahrir was quoted as saying;

“Initially, I predicted the GE14 to be plain sailing. But then I hear these things about people coming to Johor including Khalid Abd Samad (Shah Alam MP), so I thought, since everyone is interested in Johor, I too want to be in the game and face them in any situation.”

I wrote this in August when Shahrir first made it known that he may defend his seat;

I wish they could just be frank about it and said - there's no one else to replace Shahrir to contest the JB seat because Shahrir never trained anyone to replace him there.Instead, Shahrir said he's going to discuss about it and such. What to discuss lah? It's a done deal. Don't be malu kuching and pretend, can or not?Also, next time don't be gatal and say don't want to contest anymore while in actual fact you knew that there's no one else to replace you because you designed it that way.

And yes, I thought it would be exciting if Dr Mahathir will be the one to contest against Shahrir. 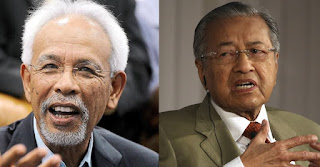 It's logical as the handsome old man said he wanted to kill off Umno and what better way than doing it by wresting JB ,which is the Umno's birth place, from Shahrir who made his political career by criticising him all these years.

Definitely not in Langkawi or Putrajaya, right?

After all, Pakatan Harapan had made it known that they are making Johor their front line state in the coming election.

I think they feel that even if they can't win the next general election, it would be good enough if they can capture Johor, which is the third richest state after Selangor and Penang which were already in their hands and not likely to revert back to BN.

Whatever it is, Shahrir has now put himself in the spotlight by challenging Pakatan to throw a heavyweight candidate to go against him.

With that bravado, I think JB will be the focus in Johor this coming general election, the same way Gelang Patah was in 2013.

At that time Lim Kit Siang went to the Chinese-majority constituency fully confident of thrashing any MCA candidate put up against him.

It was Chinese tsunami time.

He was instead met by then Menteri Besar TS Abdul Ghani Othman, the first ever Umno leader to contest in a Chinese majority area.

Ghani, who initially wanted to retire after leading Johor BN for the last time into that general election, was asked by  DS Najib Razak to do so.

The PM had been advised by his better advisers that Kit Siang needed to be contained in Gelang Patah and the only way of doing that was by placing Ghani there. 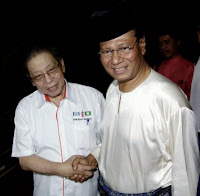 The strategy worked. Despite losing there, Ghani managed to force Kit Siang to focus his campaigning in Gelang Patah instead of roaming around and doing more damage in other parts of Johor and elsewhere.

This time, it's Shahrir's turn, I think.

But unlike Ghani, he is the one now challenging the Pakatan people to put a heavyweight candidate against him.

And also unlike Ghani, who had to contest in the Chinese majority Gelang Patah instead of his stronghold in Ledang, Shahrir is waiting for his challenger in JB where he still has over 10,000 majority and had won in donkey's number of elections.

So by right, Shahrir shouldn't be too worried about losing his seat. Plain sailing....those are his words.

Well, good luck to him then.

I still hope it will be Dr Mahathir against him in JB.

Maybe Shahrir can do a Ghani by containing Dr Mahathir there.

Then Shahrir can be the hero some of my friends thought he is.

Still, if his opponent is really going to be Dr Mahathir.... hmmmm.....okay,I'm waiting for him to say it in his own words that he is challenging Dr Mahathir to go against him in JB.

That would really make my day.

By the way, I did once write that Kit Siang should contest against Shahrir.

I wrote this just two months before the last general election in 2013;