Apandi Ali vs RPK and Khairuddin (there's Azeeez in there somewhere, too!)

actually reminds me of the Korean historical dramas which I enjoyed quite a lot. 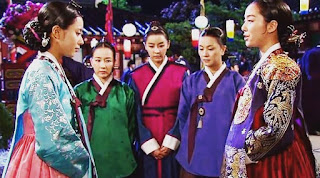 All those palace intrigues were very interesting to me.

Things like the queen ganging up with the king's favourite concubine in their fight against the scheming head of concubines.

Then there's the eunuchs and court officials running around trying to grab a bit of power for themselves at the lower level of the palace hierarchy.

These sorts of things actually do happened in real life power struggles too.

The one highlighted by Rocky involves BN people but actually Pakatan people also have such things.

For example, just not too long ago, it became public knowledge that Azmin Ali was ganging up with people like Lateefa Koya in their fight for power in PKR against the scheming Rafizi Ramli.

In the Korean historical drama context, I just imagine Azmin as the queen, Lateefa as the favourite concubine and Rafizi as the scheming head of concubines.

Of course, it would help if Rafizi is a bit less chubby....hehehe

The smaller players in PKR could be the manoeuvring eunuchs and court officials.

Well, for the BN's version, you all can read Rocky's posting again and use your imagination as to who should be of which character.

Actually, I think it's the same on both sides.

The only significant difference is that for now BN has the power and therefore there are more at stake in their internal power struggles.

I believe it will be the same if Pakatan ever managed to defeat BN and has the power to rule the country in their hands.

It's unavoidable in any organisation.

At a lower level we have office politics at the workplace.

It can't be helped as most people want to move up in the organisation they worked for and the only way some of them can do it was to play office politics.

I went through this at my previous workplace.

I have to admit that I'm totally useless when it comes to these sorts of maneuverings as my only talent is probably doing my work the best that I could.

I also don't know how to sweet talk the bosses. If they do stupid things, I would say "Boss, that's a stupid thing to do".

Well, maybe I'm the stupid one for saying that :)

I also don't know how to make my bosses happy by praising them all over or following in their footsteps even if those footsteps would eventually lead the organisation into the longkang.

Others, however, were very good at it. In fact, that's their only real talent.

For instance, when the big boss went around bullying one of the junior executives, the whole gang of flunkies fell all over themselves in bullying their subordinates too, so that they could be seen as in line with the big boss' ways of doing things.

Honestly, I was at awe when I saw the way they kissed the bosses' ass. I can never do that, okay...too disgusting leh...

Needless to say, people like me lose out in the end and the organisation is now own by the gang whose actual talent is just ass kissing the big boss.

Well, I don't want to say how the organisation is doing under those people now as I don't want you all to accuse me of being a sour grape, okay.

That's just the way things are in this world, I guess.

So, if you want to move up in an organisation, you better acquire some ass kissing and office politics skills.

Otherwise, you just lay low, do your job well (but not too well, as you may be noted for your talents and presumed to be a threat by the ass kissers) and settled with just the aim of getting your salary paid at the end of the months.

I gave that advise to my former colleagues, actually.

But still, I also gave this additional advice to my former collegues,

Don't despair when you lose out to those scheming people. The more important thing is to keep your conscience clear and do the right things. I believe that's what God wants us to do.

If we do the right things, God will provide for us, one way or another.