I think I wrote quite a bit in the past about BN's not so clever strategy to win the hearts and mind of the people.

So this time, let me tell you how the Pakatan people can be not so clever either on that one.

I read this story just now and think that they got it wrong attacking efforts to improve the public transport system,

"despite the billions of ringgit poured into these large public transportation rail projects, the overall ridership for the LRT, KL Monorail and KTM Komuter has not increased significantly over the past two years.
As the figures below will show, Najib’s administration should be ashamed that it has spent so much money on these projects with so little apparent benefit to the rakyat."

For me, it's silly of Ong to attack the government for spending money to improve the public transportation system.

It doesn't matter what the statistics at the moment indicate.

No matter what line of his argument is, the government's initiative on public transport is an issue which the opposition should not have argued.

It makes them look silly.

It's very much like in the 1980s when Lim Kit Siang attacked Tun Dr Mahathir Mohamad when the then prime minister initiated the privatisation of the North-South Expressway project.

Just imagine if Kit Siang had managed to stop Dr Mahathir from doing that one.

If he had his way then - government, rather than private sector fund the project - we would still be travelling on the old trunk road, crawling for hours just to get to nearby places.

Well, even with the highways we still got stuck in jams during festive seasons. Without them, it would be worse.

Even Kit Siang's son Guan Eng, the weird looking Penang chief minister is now all for privatisation of such endeavours, paying quite hefty sums to consultants just to study his tunnel project and others.

Ong should bear all that in mind before he attacked the current improvement of the public transport system.

Ten or 20 years from now we would likely be unable to imagine how life would be if we still don't have things such as the MRT.

I really don't understand why Ong, supposedly being a smart guy that the Pakatan people said he is, tried to harp on this issue which I think will only make the opposition look ridiculous.

Opposing for the sake of opposing, that's what many would say.

Even Dr Mahathir and Tun Dr Siti Hasmah took a ride on it. 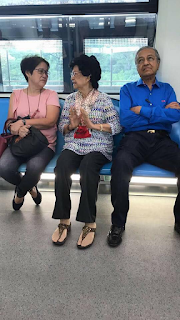 It's as good as those in Tokyo and Singapore.

I believe it's the way forward for Malaysia to be a fully developed country.

We can't be developed if we continue to get stuck in traffic jam in downtown KL.

In fact, these improvements should have been done a long time ago.

Really, this is one issue which the opposition can do better by keeping quite as opposing it will only turn off people.

On Ong's insistence that people are not taking public transport despite the initiative to improve it, he should know that most public transportation projects requires a certain gestation period to be fully utilised.

A friend who is a bit of an expert on this told me that there must be a buy-in process from the public for it and therefore the operators need to first come up with a lot of campaigns to encourage the public to leave their cars at home and use the public transport system.

This take a bit of time, and we should give it that time.

My friend said as an MP, Ong should offer himself to help the operators with their campaigns so that more commuters from Serdang use the public transport system.

"Admittedly, Ong is right when he said efficiency and affordability are issues which needed to be overcome. But that will eventually come if the system has reach critical mass of ridership," he said.

I have to agree with my friend that it doesn't help if people like Ong continously derides the operators rather that lending a hand to promote the use of public transport.

Someone sent me this last night,

The modal share of public transportation within the Greater KL/Klang Valley in 2010, was only at 10%.

Guided by the National Land Public Transport Master Plan (NLPTMP) established in 2013, we have set ambitious goals to achieve a modal share target of 40% for land public transport in urban areas by 2030.

With concerted effort, in 2015, the modal share had grown to 20%, marking a significant progress.

In 2015, an urban rail fare review exercise was undertaken as it had not been reviewed over the past 19 years.

This numbers does not include the MRT Line ridership.

The full opening of the MRT Line 1 alone, recorded a daily ridership of 101,024.

Adding to this growth was the LRT Ampang Line which recorded an increase of 14% which translated to 184,931 daily ridership in 2017.

The KTM Komuter services has suffered a dip in ridership in 2017 due to the Klang Valley Double Track (KVDT) rehabilitation project, which saw the frequency impacted.

However, we expect ridership to stabilise and pick-up once the KVDT rehabilitation work which covers the upgrading of track and signaling systems is completed in 2019 to modernize the 42km KTM Komuter network.

In the case of the KL Monorail ridership, the numbers have also hit a downtrend in 2017 with a reduction of 11% compared to 2016 bringing ridership to 53,337 due to the removal of the 5 four-car Monorail train sets due to safety concerns which resulted in reduced frequency.

Prasarana is taking the necessary actions to resolve this technical issue in stages.

Commuting via public transport today has also become relatively cheaper than owning a car, especially if one factors the cost of ownership, insurance, road tax, maintenance and related expenses including parking, fuel, toll and not to mention unproductive hours spent in traffic.

For example, a commuter can take an MRT Feeder bus to the Sg Buloh station for RM1 and take the MRT to Pasar Seni for RM3.70 and switch to an LRT ride to KLCC for RM2.10, at an affordable RM6.80, one way.

This does not take into account the further reduction on Touch ‘n Go and 50% concession rates enjoyed by students, senior citizens
and the disabled.

The Customer Satisfaction Index (CSI) an independent survey carried out by SPAD indicated that 84% of respondents are satisfied with the urban public transport in 2016, an increase of 10% from 2015.

These findings reflect the Government is on the right track in planning and implementation of initiatives under the National Land Public Transport Master Plan.

To continue to attract more ridership by making transit more seamless, SPAD will soon launch the Journey Planner in quarter 4, 2017 and implement the integrated ticketing system by 2019.

Many high impact projects are being delivered, and we are making big changes to people's lives from the position we were in 10 years ago.

Moving forward, the Government remains committed to ensure that our longer term plans to improve the bus network, and increase the rail
capacity on the existing lines progresses well with projects such as LRT3, MRT 2 and the upcoming MRT 3.
-End–

E-mail : communications@spad.gov.my
Posted by Annie at 16:41