Rewcastle-Brown and Ambiga drop the ball for Pakatan

This is definitely bad for Pakatan,


According to her Defence and Counterclaim statement that was provided for The Malaysian Insight, Rewcastle-Brown said she spoke to the former Bersih chairman in July 2016 regarding Najib, 1MDB and PAS.
"Ambiga had told the defendant that her sources, whom she said were reliable, had estimated the amount that had been paid was around RM90 million," said Rewcastle-Brown in her court filing dated October 11.
Rewcastle-Brown's defence was filed in relation to PAS president Abdul Hadi Awang's defamation suit against Rewcastle-Brown in April this year.
It shows that Sarawak Report, which is now known as a prominent pro-Pakatan "whistle-blower" website is an unreliable source of information.

I have never studied journalism but I know that one of the most basic things that journalists must never do is to reveal their anonymous sources.

They were supposed to protect their sources even if they have to go to jail to do so.

In this case Rewcastle-Brown should by right must protect Ambiga, who is her source, even if she was to be cited for contempt of court.

I'm quite sure the former Bersih chairman had wanted to remain anonymous when she told Rewcastle-Brown about Hadi allegedly taking money from PM DS Najib Razak. Otherwise, Sarawak Report would had quoted her from the start instead of putting her as just a source.

Now that it's out in the open, Ambiga will come under public scrutiny for alleging that Hadi had taken money from PM Najib Razak in return of Pas' support for BN.

She will have to testify in that court case in London or Hadi could initiate a separate legal suit against her here where she would likely be compelled to produce evidence or reveal her source.

When that happened, does Ambiga willing to protect her source if she has no evidence to support her allegation against Hadi? Is she willing to go to jail to do that?

Rocky was more direct when he asked,


Now, who will Ambiga throw under the bus? 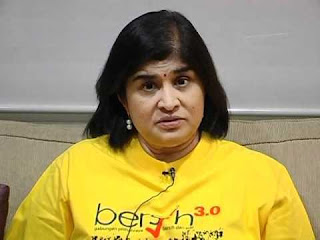 Well, I seriously think Rewcastle-Brown and her Sarawak Report has now been TKOed by this whole thing.

Firstly, she should not have written such a serious allegation against Hadi based solely on just what Ambiga told her.

Instead, she should have double checked with other sources to corroborate the allegation before writing and publishing it.

To make an allegation based on the mere words of just one person who wished to be anonymous was very reckless and irresponsible.

Especially so when Sarawak Report has made its name worldwide as one of the main critiques of the Malaysian government and its leaders. International publications had quoted it in articles critical of Najib and the country.

Then, as I wrote above, by right Rewcastle-Brown shouldn't had blown Ambiga's cover as that effectively sealed Sarawak Report's reputation as an untrustworthy source of information.

A whistle-blower shouldn't blow the cover of its sources, okay.

Unless, of course if Ambiga herself doesn't mind for her cover to be blown, which I doubt, as that would mean she herself will face legal troubles.

Now that it has come to this point, Ambiga should be ready to reveal her sources or produce evidence to support her allegation against Hadi.

Somehow, I doubt she can do that even if she wants to.

My bet is that she will go to court and says that she was merely speculating or even joking with Rewcastle-Brown about the whole thing and she didn't expect what she said to be published.

Whatever it is,  I think both Rewcastle-Brown and Ambiga will come out of this looking really bad.

Bare in mind, that story of Hadi taking money from Najib had been circulating and quoted numerous times by Pakatan people.

Now that the whole allegation looks more and more like a fake news, it surely doesn't look  good for Pakatan at all.

People will start to doubt the other stories they told in their effort to oust Najib and the BN government.

The only way this could be prevented is for Ambiga to suddenly produce in court the hard evidence against Hadi which prompted her to make the allegation in the first place.

Hopefully, Ambiga will not just turn around and said she had heard it from Tun Dr Mahathir Mohamad or DS Anwar Ibrahim or Mat Sabu, etc.

If she does that, it's really as if she is throwing the whole Pakatan under the bus.

Well, I believe Najib and the whole of BN scored a big one on this.

Too bad for you all Pakatan people.
Posted by Annie at 15:09