Apparently, there are quite a number of people who support the idea of my home state Johor to break away from Malaysia.

This is one of them from my previous post,


Anonymous17 October 2017 at 14:56
"I believe Johor will regress to be a real third world autocratic country if it is to go on its own."

What, "third world autocratic country" - you mean like Malaysia currently : )

"My friend said that it all started with that ridiculous Muslim-only laundry nonsense in Muar."

DYMM Sultan Johor & TMJ have been very steadfast in drawing the line on the Najis al-Songlap regime and extremism. They have been doing so for years already.

Actually Johor would be VERY successful on its own.

If Singapore did not regress or become a pawn (BTW, China owns the pinklips crooked backside due to 1MDB bailout via ERCL), then why not Johor with the wise leadership of the Sultan?

No problem at all.

Develop links with Singapore and make JB a regional centre of excellence.

An independent Johor would thrive.

Safe from the hooves of the hippo thief.

From the way the comment was worded, I believe this Johor separatist is a Pakatan supporter.

There were several other similar comments.

I'm a bit confused because all these while I thought Tun Dr Mahathir Mohamad who now leads Pakatan as its chairman was against any idea for the break up of Malaysia.

Or maybe these separatists were the confused ones....I'm not sure....

I never believe Johor will separate from Malaysia but since there are those who insisted on it, I decided to write this for academic purposes. 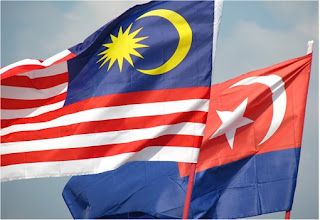 Anyway, from such comments, I concluded that the Johor separatists wanted some sort of a monarchy system if the state is ever to go on its own.

Well, basically, there are two types of monarchy systems. Please click on the links to learn more about them;


I believe what we have now in Malaysia is a constitutional monarchy while absolute monarchy is something like what they have in Brunei.

I think ours is better.

It's more democratic as we the rakyat have the ultimate power to decide where our country is heading.

And I prefer Johor to remain part of that democratic Malaysia.

Of course the separatists claimed that Malaysia is no longer democratic and therefore they support for Johor to leave the federation.

I think such argument is very irresponsible because I believe that Malaysia is still a democracy.

Well, there are still opposition parties and people who support them and they are quite free to say a lot of things against the government which if they were in Brunei would land them in jail.

They would end up in jail for those too if they were in Singapore. The rich supposedly democratic island republic still got ISA, okay.

Even if the Malaysian democracy is flawed, I don't think separatism is the answer. It's our responsibility to correct it and I believe we still have the power to do so.

Okay, I also feel that those who preach Johor separatism need to learn a bit more about the state's history.

This is a simple one I took from Wikipedia,


In the early 16th century, the Sultanate of Johor was founded by the Alauddin Riayat Shah II, the son of Mahmud Shah, the last Sultan of Melaka who fled from the invading Portuguese in Melaka. Johor sultanate was one of the two successor states of the Melaka empire. On Malacca's defeat by the Portuguese in 1511, Alauddin Riayat Shah II established a monarchy in Johor, which posed a threat to the Portuguese. The Sultanate of Perak—established by Mahmud Shah's other son, Muzaffar Shah I—was the other successor state of Malacca. During Johor's peak, the whole of Pahang, present day Indonesian territories of the Riau archipelago, and part of Sumatra Island was under Johor's rule.[8]
A series of succession struggles were interspersed with strategic alliances struck with regional clans and foreign powers, which maintained Johor's political and economic hold in the Straits. In competition with the Acehnese of northern Sumatra and the port-kingdom of Melaka under Portuguese rule, Johor engaged in prolonged warfare with their rivals, often striking alliances with friendly Malay states and with the Dutch.[citation needed] In 1641, Johor in co-operation with the Dutch succeeded in capturing Melaka. By 1660, Johor had become a flourishing entrepôt, although weakening and splintering of the empire in the late seventeenth and eighteenth century reduced its sovereignty.[citation needed]
In the 18th century, the Bugis of Sulawesi and the Minangkabau of Sumatra controlled the political powers in the Johor-Riau Empire.[citation needed] However, in the early 19th century, Malay and Bugis rivalry commanded the scene. In 1819, the Johor-Riau Empire was divided up into the mainland Johor, controlled by the Temenggong, and the Sultanate of Riau-Lingga, controlled by the Bugis.[citation needed] In 1855, under the terms of a treaty between the British in Singapore and Sultan Ali of Johor, control of the state was formally ceded to Dato' Temenggong Daing Ibrahim, with the exception of the Kesang area (Muar), which was handed over in 1877. Temenggong Ibrahim opened up Bandar Tanjung Puteri (later to become Johor's present-day capital) in south Johor as a major town.[citation needed]

Flag of Johor. The colour blue represents the State Government, the colour red for warriors defending the state, the white crescent and 5-sided star represent the monarchy and Islam.
Temenggong Ibrahim was succeeded by his son, Dato' Temenggong Abu Bakar, who later took the title Seri Maharaja Johor by Queen Victoriaof England. In 1886, he was formally crowned the Sultan of Johor. Sultan Abu Bakar of Johor (1864–1895) implemented a state constitution, developed a British-style administration and constructed the Istana Besar, the official residence of the Sultan. For his achievements, Sultan Abu Bakar is known by the title "Father of Modern Johor".[citation needed] The increased demand for black pepper and gambier in the nineteenth century lead to the opening up of farmlands to the influx of Chinese immigrants, which created Johor's initial economic base.[9][10] The Kangchusystem was put in place with the first settlement of Kangkar Tebrau established in 1844.[11] The decline of the Kangchu economy at the end of the 19th century coincided with the opening of the railway line connecting Johor Bahru and the Federated Malay States in 1909 and the emergence of rubber plantations throughout the state.[12] Under the British Resident system, Sultan Ibrahim, Sultan Abu Bakar's successor, was forced to accept a British adviser in 1904. D.G. Campbell was dispatched as the first British adviser to Johor. From the 1910s to the 1940s, Johor emerged as Malaya's top rubber producing state, a position it has held until recently.[citation needed] Johor was also until recently the largestoil palm producer in Malaysia.[citation needed]
During World War II, Johor Bahru became the last city on the Malay peninsula to fall to the Japanese. Allied Forces, Australian, Malayan and Indian forces held out for four days in what was known as the Battle of Gemas,[13] the General Yamashita Tomoyuki had his headquarters on top of Bukit Serene and coordinated the downfall of Singapore.
Johor gave birth to the Malay opposition that derailed the Malayan Union plan. Malays under Dato' Onn Jaafar's leadership formed the United Malays National Organisation (UMNO) in Johor on 11 May 1946. (UMNO is currently the main component party of Malaysia's ruling Barisan Nasional coalition.) In 1948, Johor joined the Federation of Malaya, which gained Independence in 1957.

It puts things in perspective.

Okay, before I end this post, here's a very simple history lesson on my favourite foreign country - Japan;