On the proxy war in Najib's camp

Later in the day PM DS Najib Razak will table the 2018 Budget.

But I think I know what it's going to be. It's definitely going to be a people-friendly budget, considering that the next general election is to be held the latest in August next year.

There will be tonnes of stories about it later.

So, no need for me to comment on it.

For today, I rather give my take on the ongoing nonsense between people who supposed to be big shots in the Najib's camp.

The way I see it, the fight is not really between Apandi Ali and RPK as it seems to be.

It's between people who are behind those two.

This is sort of a proxy war for influence within the PM's inner circle.  We can only guess the real identity of the main players as they will never come out in the open.

Okay, as you all may know by now, the first open attack in the latest Najib's camp nonsense was when RPK wrote these,

They were directed at AG Apandi and that funny Tabung Haji guy Azeez Rahim.

I strongly believe that RPK wrote those under instruction from someone who is out to knock out Apandi and Azeez from Najib's circle.

I don't think RPK has anything personal against Apandi and Azeez.

The guy is after all living in Manchester, okay.

He was just doing his job.

I said that RPK was only following instructions because this sort of things happened before.

RPK had previously attacked an MB, accusing him of being a homosexual while as far as I know he got no quarrel with that MB.

He must had done it under instruction, as in the current case with Apandi and Azeez.

I don't really like that MB guy but I felt the attack was unfair and therefore I defended the MB in this previous post on Sept 22 last year,

On yet another matter, last night I got a message from a friend asking me who is the MB meant by RPK in this story of his,

Of course I know who is the MB meant by RPK.It's an old story, actually.But I told my friend not to bother himself with such stories.I'm not a big fan of that MB, but to float such an accusation against him, in my opinion was not fair.And RPK did another posting about him just now as I'm writing this,

Guess someone really wants that MB to be thrown out.Well, this is all very sordid.

For yet another previous proxy war within Najib's camp involving RPK, you all can read these;


If you followed what transpired in all these fights, the modus operandi is always the same.

Anyway, for the current one, I think RPK had toned down the attack quite a bit following Apandi's aggressive response to it. You can read it here,


Maybe the people behind RPK have suddenly realised that the gang behind Apandi is more powerful than they thought.

But I think it's too late for that.

This fight among them, as they were with the previous ones, had only caused BN to lose more support and provide Pakatan with quite potent ammunitions as the general election draws nearer.

It's a malady of greedy individuals who only care about their vested interests.

They are there hanging around Najib for their own selfish agenda.

They don't care about this country, the people, BN, Umno or even Najib.

These people will switch side in the event things get bad for Najib, Umno or BN. I'm quite sure of that.

That's why they remain hidden and use others to fight for them.

Their loyalty is only for themselves.

Najib should realise this by now.

By right, he should get rid of them.

These people are very much like all those scheming concubines or corrupt eunuchs of the ancient world. 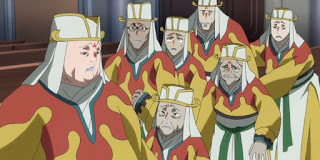 They are the cancerous cells which destroyed dynasties.

Read history of those dynasties and I think you all will agree with me.

Well, for this one, it's solely up for Najib to decide.
Posted by Annie at 13:40