No need to be disgusting

Someone asked for my opinion today on the allegation of sexual misconduct directed against MACC boss Dzulkifli Ahmad. 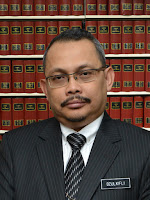 Honestly, I don't think I'm in the position to say anything about it as the whole thing looks like something very personal.

Furthermore, I had seen this report a few days ago,

“Our divorce was done amicably. It is a personal matter and has nothing to do with Tan Sri Dzulkifli Ahmad as alleged by the video. We will not hesitate to sue those who continue to spread the controversy for their own personal gains,” wrote Shazreen on Facebook two days ago, which was also signed by her former husband Mohd. Hafiz Jehangir Shah.

I would be sceptical if the denial was just by the woman, but it looks like she was backed by her ex-husband on the matter.

If someone has to complain, then it should be the woman's ex-husband, but in this case, he is also denying the allegation against the guy who had allegedly enticed his wife away from him.

Really, I can't see how I can say anything more about this matter.

The person who was supposed to be most aggrieved by whatever that had happened said he was not so.

I'm not a religious person but I believe that all I can say is that this matter is now between those personalities said to be involved and Allah the almighty.

To go beyond that is to risk making false allegations against those people, which from what I know is a grave sin according to Islamic teachings.

Well, I believe other religions teach the same too.

Anyway, I read some of the blogs which mentioned this allegation against Dzulkifli and found the way it was discussed rather distasteful.

This is a comment at a posting on the matter which I picked  from one of those blogs,

I was like...what the hell was that for?

Do they really need to write such comments?

Seriously, I don't think such comments will help win support for whatever cause the commentator was championing.

I hope, you all who read this blog will not leave such comments here.

I had received complaints from those who felt that I was being too lenient in letting through comments at this blog but I told them that was for freedom of expression.

Well, I actually spiked off quite a lot of comments too, especially the vulgar ones which used words such as "melancap", "fucking melayu" etc.

I used to be very lenient before, but decided I need to control the comments a bit more after a 14-year-old girl said sometimes back that she reads my blog.
Posted by Annie at 18:21