After reading this Bernama story yesterday, I was convinced that there will be a real political cooperation between Umno and Pas for the coming general election,


The prime minister, who is on a one-day visit to Kelantan, said because of Pas’ maturity in politics, the party had become a constructive opposition party.
“We oppose (one another), but in certain matters that bring good and benefit for the people, we can cooperate,” he said.
Most significantly, Najib said all that at an Umno function in Pas-governed Kelantan and in the presence of Kelantan Umno chief DS Mustapa Mohamed.

I think it's sort of a signal to Tok Pa and Kelantan Umno people that it's okay for them to let Pas keep the state as it has now become a good opposition party, and friendly to BN.

In return, perhaps they may probably have a Pas-Umno coalition Kelantan government after the next general election. 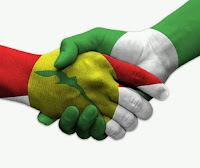 The same set-up seems possible in other states too, particularly in the outright Malay majority states of Kedah, Terengganu, Pahang and Perlis.

They may have an arrangement where Pas lead in Kelantan and Kedah while Umno lead in Terengganu, Pahang and Perlis.

If Umno and its BN allies prevail in the other states, Pas elected representatives may also be included in the state administration there even though the party may not be joining the ruling coalition.

BN may also expect support from Pas MPs in the parliament even if they are sitting in the opposition side of the hall.

In return, Pas may get the support of Umno MPs every time it proposes some "Islamic laws".

There may even be ministers appointed from among the Pas MPs at that point.

It's actually a good arrangement for both Umno and Pas.

It secures at least the five outright Malay majority states for Umno in the bigger picture, while Pas may get to lead Kedah in addition to its Kelantan now.

Yes, Kedah may then also have syariah public whippings too like in Kelantan soon.

Pakatan's Malay parties of Pribumi and Amanah which were expected to contest in those states may not likely stand much of a chance against a combined Pas and Umno arrangement.

Okay, maybe Pribumi and Amanah can put up a bit of a fight in Kedah but I don't think the Dr Mahathir factor is enough for them to defeat a combined Umno and Pas in the state.

Kedahans that I know told me that they will only vote either BN or Pas. They seemed allergic to other than those two parties. It's brand loyalty, I guess.

With that, Umno can therefore concentrates its energy and resources in the other states where Pas knows that it would not be able to do much due to its lack of non-Malay support.

BN will probably not put up too much of a fight in Penang, Selangor and Federal Territories. The anti-BN sentiment on the ground there is probably very bad, that they would not want to waste too much effort and resources.

Meanwhile, Sarawak is already in the bag.

Sabah too. Probably Shafie Apdal's Warisan may manage a decent showing but I doubt it will be able to do more than just winning a few electoral seats.

So the only real fight will be in Perak, Negeri Sembilan, Malacca and Johor. They are going to be the key states of GE14.

BN is likely to put more efforts there than elsewhere.

I believe Pakatan planners knew this and will do likewise.

Their chances are the best in Perak and Johor where the racial composition and level of political awareness are similar to that of Selangor.

Even if they can't wrest those states, Pakatan may likely be able to get extra parliament seats there.

I think Negeri Sembilan and Malacca are at slightly lesser risks for BN compared to in Perak and Johor.

Still, BN does have the over all advantage at this stage.

Worst case scenario for BN is that it loses in Penang, Perak, Selangor, Federal Territories, Negeri Sembilan, Malacca and Johor but still wins (with the help of Pas) in Perlis, Kedah, Pahang, Terengganu, Kelantan, Sarawak and Sabah. That's 7-7.

But a more realistic scenario is that, BN is just likely only going to lose in Penang, Selangor, Federal Territories and maybe Perak.

Despite some of my friends in Johor saying my home state will likely fall to Pakatan, I still think BN will prevail there. It may lose some more parliament and state seats but I just can't believe that it can become another Selangor.

To a lesser extent, I feel the same about Negeri Sembilan and Malacca.

Combined with Pas MPs, I also think BN will still control parliament even though without the two third majority after GE14. It should basically be about the same as now.

Again, bear in mind that my calculations include the likelihood of Umno-Pas coalition state governments in Kelantan, Terengganu, Pahang, Kedah and Perlis.

Okay, at the moment, that's how I think it will be for GE14 and its outcome.