A Rosmah's defence over the private jet issue

Someone forwarded to me the following via Wassap .

Honestly I don't know who wrote it and I didn't ask.

I just find it interesting as it is quite a good defence of DS Rosmah Mansor over the use of the private jet issue. 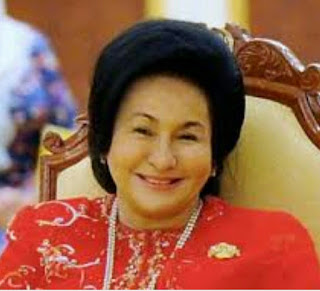 You can read me kena marah here. (click on it, please)

I actually did it because I  believe in being fair.

I think it's only fair that I  publish this defence of Rosmah here again.

You all be the judges of it.

I give YB Rafizi Ramli and Amanah MP YB Raja Bahrin 24 hours to admit mistake over Rosmah's trip to Turkey, apologize for being malicious and admit he has batal puasa.

(You can always brush me off by asking me "Who am I" and saying I am not your level, to which I would say "LUT YOU")

2. Rafizi knew that the jet was on 2 months lease to replace another govt jet which was undergoing major maintenance but he still tried to blame the entire 2 months on Rosmah by saying she should not have rented a private jet for this trip - a fact that he himself admitted when he admitted that he was wrong to give the impression that RM86.4 million was used by Rosmah but now reduced it down to RM1.5 million.

3. Rafizi knew that the plane was on 2 months lease but still tried to use hourly charter rates to calculate a grossly inflated and unrealistic two months rate when even the most expensive 2 months lease rate would be about RM2.4million - thus even his revised calculation of RM1.5 million is very wrong.

4. Rafizi knew that this plane was a short-term government jet shared for use by other qualified VIPs and that is why it flies from our military bases but still questioned why Rosmah flew from there even though she is not "military"/

5. Rafizi himself acknowledged that the trip was a short trip where she flew to Istanbul and back to KL within 26 hours. This is certainly not a holiday at all as the schedule is so tight and the majority of the time is spent on the plane.

6. Rafizi knows that this trip is not even a private trip in Rosmah's personal capacity as it was to receive the Cambridge IF Analytica Global Good Governance 3G Children Welfare Award from Dr Sheikha Aisha Faleh Al-Thani of Qatar on behalf of PERMATA - a govt initiative that has benefited thousands of young children for many years..

This is what the award organizer Prof Humayon said:

“There are few examples for this kind of success, and I must congra­tulate the Malaysian Government and Permata for taking up this important issue. We would like other countries to look at the success stories of Permata and emulate this model. I think this is a good service to humanity, coming from Malaysia to showcase how talent can be nurtured from an early age,”

7. Rafizi became even more petty when he showed a video and questioned the number of bags that was brought onto the plane as hand luggage and tried to suggest that it was Rosmah's luggage and extravagant lifestyle - despite the fact that it was a short-trip where the majority of the time are spent on the plane so why would Rosmah bring so much luggage or clothes?

Rafizi may not have known that much of the luggage were the big costumes of the Permata arts group that performed at the Istanbul awards (see photo)  but from the video, Rafizi would also know that there was a total of 20 crew and passengers and they themselves would also require hand luggage thus why are you surprised.

8. Rafizi was also petty to ask why these bags were carried a hand-luggage instead of being put in the cargo hold. If Rafizi was able to check what the plane specifications were, he would also know that this is not a normal passenger plane but an extended range ACT (Additional Central Tank) jet that was modified where the cargo hold was fitted with an additional fuel  tank.

It is clear from the above facts that:
1) Rafizi deliberately lied despite knowing better.
2) Rafizi's expose was for the purpose of the by-elections to help Pakatan Harapan win.
3) Rafizi intended to incite hate by targeting Rosmah, who is not even contesting in the by-elections.

Therefore, Rafizi purposely tried to incite hatred against a lady who was going on a very hectic trip on behalf of the govt for young children welfare causes for the purpose of greed for power to win a by-election based on outright lies and half-truth.

Is it worth it for two grown men to incite hatred towards a lady based on lies and half-truths in the month of Ramadan just to win elections because of your greed for power?

So what if you win? I hope it is worth it for both of you.