The sad thing about this weekend (updated)

As reported by Singapore's Straits Times,

Someone passed me what was supposed to be  a weekend schedule of Tun Dr Mahathir Mohamad the other day. 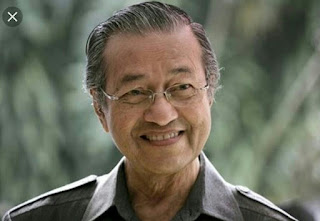 According to it, the former PM and Umno president was to  have programme in Sungai Besar and Kuala Kangsar today and tomorrow respectively.

It's quite obvious that the programme was part of the Pakatan Harapan's by-election campaign there.

I felt a tinge of sadness when I saw it.

It really has come to this - Dr Mahathir campaigning outright for the opposition.

The programme stated that he is to deliver his speeches at a Chinese restaurant in Sekinchan and another similar venue in Kuala Kangsar.

It was almost certain that the whole thing was organised by DAP and not even Amanah which was actually contesting in those by-elections.

How things have changed.

I'm not sure whether the 90 years old statesman will really go through with it, but just looking at the programme made me sad.

Obviously, Dr Mahathir has come to a point where he doesn't care to risk all that he has in his effort to topple DS Najib Razak.

I wish it has not come to this.

From the start of the Umno rebellion last year, I have been advocating for both sides to talk and sort things out so that the party will not be torn apart.

Unfortunately things only got worse with both unwilling to cool off.

In fact the traded barbs became even more vicious to a point that I knew it would be hard for each other to forgive.

My guess was that Dr Mahathir feels that he has nothing to lose anymore even if he join forces with the worst of his enemies, the DAP in his fight with Najib.

After all, he's totally convinced that Najib is bad for Malaysia and that the PM, based on his action and those of his supporters seemed to want their fight to be a no quarter given nor asked one.

Well, the feeling was probably the same on both sides, I  guess.

Umno simply has to suffer along.

For Dr Mahathir, the existing Umno is no longer the party that he led for more than two decades.

Dr Mahathir is a tough nut indeed, but still, it's heart breaking to see him having to do what he is doing now.

The fact that he is doing it at such an advanced age makes it even more sad.

How I wish the handsome old man could just enjoyed his retirement in peace after all that he had done for the country those many years ago.

But then again, that was his choice and this is still for now a free country.

Maybe Dr Mahathir is happier doing what he is doing now than spending his old age doing what people of his age supposed to be doing.

Whatever it is, I hope he will be alright and not exhaust himself this weekend.

From what I was told the weather, especially in Sungai Besar has been quiet hot of late. And this is the fasting month. I hope Dr Mahathir's assistants can make sure he drinks enough water during buka puasa and have proper rests in between  the programme.

All that, if indeed Dr Mahathir is really going to go through with the whole thing.
Posted by Annie at 06:40