Once again, someone sent me screenshots of a Facebook post by former New Straits Times group editor Mustapha Kamil Mohd Janor this morning, 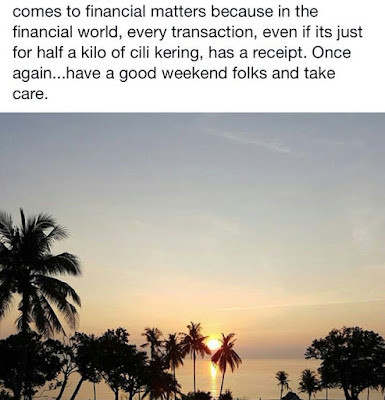 Honestly, I was not really sure what Mus was referring to in the post, because I hardly read blogs these days except those in my blog roll.

But since Mus had offered to be investigated, I think those who accused him of whatever, should initiate it.

As people nowadays like to say, if you want to accuse someone of something, you better have the evidence to do so.

Well, I hope Mus get to meet his accusers and convince them that he quit his job simply because of his conscience as he previously claimed.

Right or wrong in the eyes of others, one must act according to his/her conscience.

It doesn't matter whether a person is for or against the establishment. As long as he/she acts with an intact conscience, the person should be alright.

I believe in that.

Here's a video clip from the movie "A Man For All Seasons" on the matter of conscience,