A story for angry people

I have this friend who once worked for a major newspaper.

He was some sorts of a senior editor or something like that.

The guy was dedicated, worked hard and was a loyal employee.

He worked there for donkey's years.

The problem with him was that he can't keep his mouth shut.

And he's very lousy at being nice to his bosses just to be in their good book.

Of course his bosses didn't like him for all that.

That, despite him doing his best and achieving relatively good results for his works.

Sometime early last year he realised that his bosses were really getting to hate him.

They gave him an annual assessment lower than his subordinates despite him working his ass off.

So, when the company offered a voluntary separation scheme to the employees, he applied for it.

Almost everyone who applied for it got it.

The guy would had gotten about RM250,000 in compensation if his application was approved by his bosses.

He thought of setting up a small laundry business using the money or something like that and retire to look after his family, especially his son who is a disabled person.

He didn't get it.

The bosses didn't approve his application for the scheme.

Instead, two months later they demoted him and transferred him to a place further away from his family.

It was clear that his bosses were forcing him to resign and maliciously doing so in a way that his years of service for the company were not to be compensated or appreciated.

He quit his job and now works quietly doing an editing job for a small publishing company own by a friend who felt pity for him and offered him the job.

The guy didn't complain too much though.

He sometimes joked about what happened to him and that was all there was to it as far as he was concerned.

The other day, we were at a buka puasa function when he bumped into his former big boss.

He said hi to the guy,  smiled at him and shaked his hand.

He even inquired about his former boss' health.

I can see that he was trying not to make the other guy felt too awkward.

Later I asked him,

"Why didn't you just punch the bastard in his face?"

"For what? I don't even hate him. My former boss used to be nice to me once and I rather think of the positive side of him," he said.

Later he explained to me why he can't hate his former big boss despite what he and the others did to him.

"The guy did a lot of good things for me before he started to dislike me.

"He was the one who promoted me to my highest postion in the company.

"He treated not only me with kindness at that time but also someone else that I really care about.

"I appreciate him for all that.

"Of course I was angry when all those things happened last year but after I calmed down I told myself that what happened was fated by Allah.

"Allah made the whole thing happened because He has a good reason for it.

"The way I see it, that VSS money was simply not my rezeki.

"Allah must had wanted me to have a different kind of rezeki. That's why he opened the heart of my friend to give me a job. 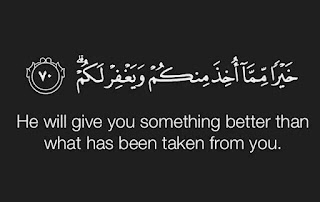 'Maybe if I had stayed in the company I would sooner or later died of stress.

"At least where I work now, there's no stress at all.

"Maybe Allah wanted me to have a longer life without the stress so that I can look after my family much longer."

Well, in a way my friend was right.

I agree with him that we should not despair when bad things happened to us.

Must always remember that things happened because Allah willed them to happen.

All we need to do is to manage ourselves in whatever situation fated by Allah.

Of course, we have to do our best with whatever we are doing.

But after that, we leave it to Allah to decide the outcome.

We must redha (accept) with the outcome because it's Allah's decision.

That way we would not have to hate anyone or be bitter about things.

If people do bad things to us and after all our efforts had been exhausted, we should just pray for Allah to take care of things.

And of course Allah will take care of things for us, one way or another.