Found another Black Dog Bone song which I think many of you would like to hear.

It's especially suitable for angry people during Ramadhan :)

I don't feel like being in fighting mode at all at the moment.

Just want to take it easy and not get agitated about anything.

People want to hate and fight, let them be lah.

I just want to do my own things and be at peace for now.

So, for today I just want to introduce (to those who don't know them yet) my father's 1970s favourite "local" band,

The then Singapore-based band became famous for their catchy Malay songs but my father considered them as being Sino-Malay. 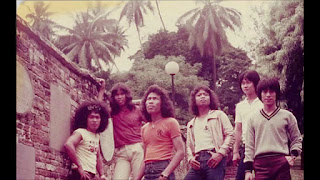 Here they are performing together this very Malay song years after their glory days,

Anyway, it's also nice seeing the guys still being friends till their ripe old age.

Guess, theirs are real friendship.

It doesn't seems to matter that they are Malays and Chinese.

Let's hope we all Malaysians can be like them too.

Note: Please don't believe it if there are people accusing them of being DAPsters later on just because they are Malays and Chinese friends featured in my blog :) Anyway, if I'm not mistaken, the guys are all Singaporeans. Maybe they are PAP members. That one I don't know lah.
Posted by Annie at 16:41