I think today I better do other things than spending time writing about something which is so obvious - significant number of Chinese are coming back to supporting BN.

Everyone can see that, except those hatemongers who wanted to "menegakkan benang yang basah" as well as their followers who hated the Chinese and wanted to throw them into the sea in the first place.

Actually, I believe that they are quite sick.

We better stay away from them, okay.

Today I rather write about what to wear for Hari Raya, which is not too long from now.

My friend from Kuantan sent me pictures of things to be worn for  the occasion yesterday.

The most impressive was a collection by Hana Tajima, 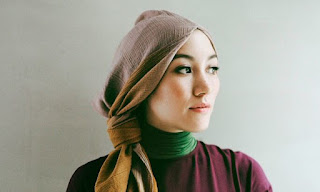 She is a British Japanese Muslim convert.

Apparently, she was quite well known, but myself being quite ignorant about fashion, learned about her for the first time yesterday and was impressed.

Her collection is available at UNIQLO,


You can check-out her blog here,


As for her conversion to Islam, I found this article from 2011

The Islamification of Britain


These are  excerpts on her story:


Hana Tajima, 23, fashion designer
Hana Tajima converted to Islam when she was 17. Frustrated by the lack of variety in Islamic clothing for converts she founded Maysaa, a fashion house that designs western-inspired clothing that conforms to hijab.
"It's true that I never decided to convert to Islam, nor was there a defining moment where I realised I wanted to be Muslim.  My family aren't particularly religious.  I was interested in religion, but very disinterested in how it related to my life.  I grew up in rural Devon where my Japanese father was the ethnic diversity of the village.  It wasn't until I studied at college that I met people who weren't of the exact same background, into Jeff Buckley, underground hip-hop, drinking, and getting high.  I met and became friends with a few Muslims in college, and was slightly affronted and curious at their lack of wanting to go out to clubs or socialise in that sense.  I think it was just the shock of it, like, how can you not want to go out, in this day and age.
"It was at about that time that I started to study philosophy, and without sounding too much like I dyed my hair black and wore my fringe in front of my face, I began to get confused about my life. I was pretty popular, had good friends, boyfriends, I had everything I was supposed to have, but still I felt like 'is that it?'  So these things all happened simultaneously, I read more about religion, learned more about friends of other backgrounds, had a quarter life crisis.  There were things that drew me to Islam in particular, it wasn't like I was reaching for whatever was there.  The fact that the Qur'an is the same now as it ever was means there's always a reference point. The issues of women's rights were shockingly contemporary.  The more I read, the more I found myself agreeing with the ideas behind it and I could see why Islam coloured the lives of my Muslim friends.  It made sense, really, I didn't and still don't want to be Muslim, but there came a point where I couldn't say that I wasn't Muslim.
"Telling my family was the easy part.  I knew they'd be happy as long as I was happy, and they could see that it was an incredibly positive thing.  My friends went one of two ways, met with a lack of any reaction and lost to the social scene, or interested and supportive.  More the former, less the latter."
Cool, isn't she?

Can never tell who's going to get it, and who's not.

So, lets do our best and pray for Allah to choose us to be among the ones who are blessed.

For the non-Muslim readers of this blog, do excuse me for getting a bit religious. It's the Ramadhan thing :)