KUALA LUMPUR, June 14 (Bernama) -- The implementation cost for the Bus Rapid Transit (BRT) system for Iskandar Malaysia is expected to cost not more than RM3 billion, said Iskandar Regional Development Authority (IRDA) Chief Executive Datuk Ismail Ibrahim."At the moment, we do not have the final value, however, it is expected to cost not more than RM3 billion, which covers infrastructure cost for building the line, operation cost including buses and several other application costs."It also covers (cost) during the intiial years which may have a shortfall in its operations," he told reporters during the breaking of fast organised by IRDA and Medini Iskandar here Tuesday.

I was like"Wow! That must be quite a sophisticated bus system to cost so much just for JB and its surrounding areas, which is Iskandar Malaysia".

I also wonder whether Irda is going to build the "infrastructure" and "line",  as well as foot the bill for "operation cost including buses and several other application costs".

And if that's so, who is going to get the "not more than RM3 billion" project.

As you read this,  do bear in mind that we are talking about buses here, not some other more sophisticated public transport system such as LRT, MRT or whatever.

Well, if they are really going to spend that much, the bus system in JB better be really good after this.

I was actually frustrated with Irda over the matter for a long time.

Public transport has always been an issue in JB and that of course include its poor public bus system.

When Irda came into being in 2007, things seemed set to get better all over JB and its surrounding areas.

It was an exciting time as a  lot of things were happening back then.

Unfortunately, the standard of public transport in JB remains more or less the same till this day.

I was actually quite chummy with Ismail's predecessor, the second Irda chief executive  Harun Johari. 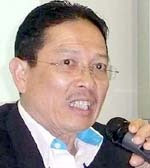 Once, I did asked him to explain about Irda's plan to improve at least the bus system.

Harun is a very efficient and no nonsense guy, but I remember it very well how he seemed to be at loss when I brought up the subject.

He asked me to give him some time as he was doing something about it.

I was okay with it as Harun had just assumed the post at that time.

He got cracking right away and less than a week later set up a task force to handle just the bus system.

If I remember it correctly, the team had a rather funny name - "Harimau Belang" or something like that. 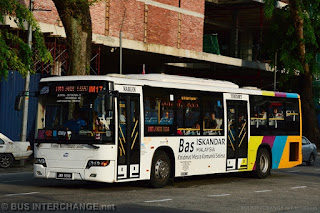 It was not perfect but at least there was an improvement.

Harun told me that it was a stop-gap measure until Irda could come up with a totally new public transport system in Iskandar Malaysia which not only include busses but also rail lines and others.

Unfortunately, less than a year later, Harun was removed from his post and replaced by Ismail.

Harun's fault I was told, was that he was not good at playing politics.

With him gone, the effort to improve public transport in Iskandar Malaysia seemed to be going nowhere.

There were lot of talks but those were just it.

That was seven years ago.

To get a glimpse of Iskandar Malaysia's bus system today, please go to these links to read stories about it,

Well, I really don't fancy having to rely on public buses in JB.

But many people really don't have much choice, don't they?

Anyway, I'm also wondering why it took Irda seven years to come up with a plan to spend "less than RM3 billion" to improve the public bus system down here.

Can't they did it back then?

Or is it that only now they found the right people who can "handle" the "less than RM3 billion" contract?

Whatever it is, I hope they do this project fast so that people in JB who need a better public bus service will not have to suffer anymore.

Don't let them wait for another seven years.

And please, if it's true that the project costs "less than RM3 billion",  please make sure it's outcome really worth that much.