So, they finally did it, 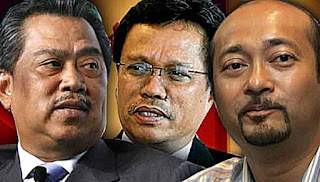 That's not really surprising, isn't it?

I actually saw it clearly coming in this post on Sept 5 last year,


Okay, I was not very accurate about DS Mukhriz Mahathir though, as I didn't expect them to get rid of him at the risk of losing Kedah.

Guess the Umno leadership are really not stopping at anything to totally crush the rebellion now.

And that's because they are in the position to do it.

The recent big wins in Sarawak, and more importantly in Sungai Besar and Kuala Kangsar about seal the fate of TS Muhyiddin Yassin, Mukhriz and DS Shafie Apdal.

Those electoral victories signaled that the majority of the rakyat are behind DS Najib Razak and support what he was doing.

Yup, that includes the 1MDB things and other stuff too.

I can't see any other way we could have interpret it.

I think the rebellion against Najib is as good as over now.

The opposition parties are now in disarray and Umno rebels were being "dispatched" or isolated.

Well, the rebellion was doomed from the start.

The first time I saw it coming was in this post on June 27 last year,

The fighting continues till this stage.

Fortunately for BN and Umno, the people seemed to be turned off by the fighting and decided to stay with the established leaders such as could be seen in Sarawak, Sungai Besar and Kuala Kangsar.

That and coupled with the stupidity of the quarrelsome opposition parties, Umno and BN are back on track.

But, don't expect the fighting to stop yet.

The rebels, despite knowing that they were actually beaten, will continue with what they were doing all the way to the next general election two years from now.

They will be hoping for Najib and his people to make mistakes along the way.

Mistakes that could turned off people from supporting the establishment.

One way that could happened was for Najib's people to get big headed now that the people appeared to be supporting them.

As I once told a prominent pro-Najib blogger, it's a game of being better liked by the people.

But as it is, some people have too big an ego that they can't help themselves but to be arrogant, obnoxious and even stupid.
Posted by Annie at 14:34