There have been quite a lot of chatters nowadays about some people from my home state Johor promoting it to get out of Malaysia.

Even my blogging captain Rocky wrote about it in his latest post,
Republic of Johor

I actually wrote my opinion on the matter last month,


I had more or less expressed my unhappiness with the idea that Johor should not be part of Malaysia.

I had also clearly stated that I didn't and will never subscribe to the concept of Bangsa Johor.

Those who have been following this blog from the start should know that I love my home state.

Nonetheless, I was also critical of its administration whenever I felt that it was doing the wrong things.

It was so because I wanted those in power to correct the wrongs so that Johor and its people will not suffer later on.

I know that because of it, I am not in the good book of people in Kota Iskandar.

Nowadays, there are even people who used that as part of the basis to accuse me of being a paid DAP cybertrooper.

Don't want to waste my time with that.

It doesn't matter to me as I feel that what I did was worth it.

I consider it as my tiny contribution for the betterment of my home state.

Back to the issue of Johor getting out of Malaysia, I hope Prime Minister DS Najib Razak will be firm on this and not tolerate any attempt, be it short or long term, to break up the country.

I also hope that Johor Menteri Besar DS Mohamed Khaled Nordin to come up with a strong statement that Johor will remain part of Malaysia "selagi ada bulan dan bintang".

I wrote about this thing a year ago,


For me, Malaysia must remain united for it to survive.

No one should be allowed to talk about taking out any of the states out of Malaysia.

Let's learn the lesson from what happened when Singapore was kicked out of Malaysia back in the 1960s.

No matter how anyone wants to put it, that was a loss for us all.

Let's not be afraid to promote peace and unity among us Malaysians so that we can defend our country's sovereignty.

Tak kira agama, bangsa or from which state.

Promoting those good things  doesn't make you a DAP cybertrooper as suggested by some people about me.

And please, do not succumb to the goading of those that promote dissension among us by telling us that  Malays must oppose Chinese, Muslims need to hate Christians or Johoreans should feel superior than other Malaysians.

Note : Bersekutu bertambah mutu - Unity is strength, is from this coat of arms of Malaysia, 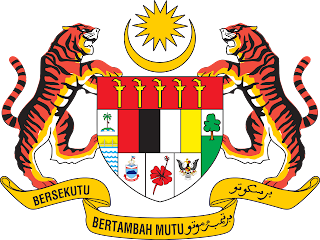