I was doing my stuff somewhere near Kemaman, Terengganu earlier today when I heard that former prime minister Tun Dr Mahathir Mohamad was to visit flood evacuees in the area.

For me it was simply fantastic. The 90-year-old statesman still care to make the trip to the flood hit area despite his age. 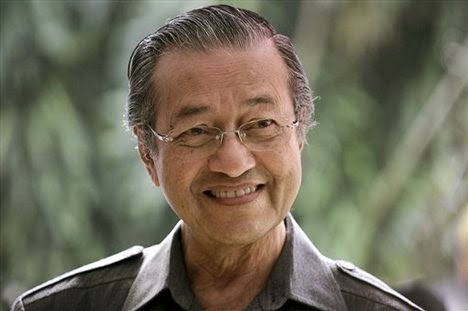 If I ever reached 90 years old, which I doubt very much, I will probably be only lying in bed and be fed by tubes.

I had decided that I must see the handsome old man.

So, I drove to the flood relief centre at Sekolah Agama AlFallah in Kemaman town where Dr Mahathir was scheduled to visit about 3pm.

Unfortunately, the officials there said Dr Mahathir's visit had to be cancelled as his helicopter could not take off from Kuala Lumpur due to bad weather.

I know the officials were telling the truth as it was raining heavily in Kemaman the whole day.

Still, I was impressed by Dr Mahathir's attempt to be with the flood victims.

It's too bad that the weather didn't permit him to fly to Kemaman. His presence would had definitely lift the spirit of the victims.

The bad weather also grounded the helicopter of PM DS Najib Razak who was scheduled to visit flood victims in Perak today.

Najib however seemed determine to do his rounds when he instead travelled to the affected areas in the state via road.

A friend who followed his convoy told me that at one of his stops where he had to take a boat ride to check on the affected area, Najib was drenched wet by the rain and had to change his clothes.

By the time he reached the last relief centre near Kuala Kangsar where he was supposed to visit, Najib looked very drained, said my friend.

By the way, my friend is not one of Najib's people. So, I was confident that she didn't try to juice up the story.

Honestly, I am a bit disappointed that some people are still harping on the accusation that Najib is not caring enough for the flood victims.

He is indeed trying his best.

Two days ago he visited the worst hit Kelantan.

Yesterday he was all over Pahang.

Today he was on an exhaustive land trip to many parts of Perak.

Tomorrow he is flying back to visit flood victims in interior Kelantan.

I expect him to continue the visits until the situation improves.

What many people may not notice was that Najib is in his 60s and the efforts he put in now is by no way a small feat.

Meanwhile, the bad weather today did not deter one guy from flying.

DPM TS Muhyiddin Yassin is the only VVIP that I know whose helicopter managed to take off from KL to flood hit areas.

Muhyiddin's helicopter landed in Dungun, Terengganu in the morning.

He visited several relief centers amidst rising water in the district.

Quite commendable of the guy who is in his late 60s.

Muhyiddin has also been on a grueling schedule the past days to be with flood victims in the worst affected areas.

I would like to record my appreciation here for the three leaders, Dr Mahathir, Najib and Muhyiddin for their efforts.