I used to consider myself as one of those moderate liberals.

Nice moderate liberal Malays of Umno such as former Johor MB Datuk Abdul Ghani Othman were wiped out at the polls on that day.

I was there on the ground as a witness of what happened.

A day after that I wrote this posting,

That posting was the most read in this blog for more than a year. It is still in the top five today.

I have toned down myself since then but I still don't consider myself a moderate liberal as I used to be.

Honestly, I'm not really sure what sort of a person I am now.

I do not hate the Chinese.

It's just that I no longer believe that they appreciate nice moderate liberal Malays.

I also no longer believe that I should smile to people who spat on my face.

I think I am being stupid if I do that.

PM DS Najib Razak is the nicest of all moderate liberal Malays, and you all can see what they did to him.

It was the same with Ghani. 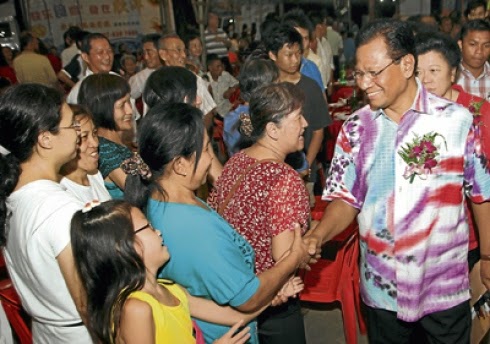 I am not a supporter of Perkasa or Isma, but at the same time I don't want to be like all those stupid Malays who think that being moderate and liberal is being cool.

Yea, I know, some Chinese will come up to those Malays and say that they like them very much and all.

They may even offer those Malays to write columns in The Star, that backstabbing MCA's newspaper.

Some may even want to make love to those Malays.

But, that's all there were to it.

When push comes to shove, the Chinese will not take into account those Malays' liberalness or moderateness.

I may be wrong for generalizing, but that was what happened on that fateful May 5, 2013.

In Gelang Patah, they rather voted Lim Kit Siang who had done nothing for them instead of Ghani who had served them well as Johor MB for 18 years.

Kit Siang is Chinese, Ghani is Malay. It's as simple as that.

At least that's how I concluded it.

Well, actually, I am writing this in response to Rocky's posting,


Why I welcome the Eminent 25


Sorry Rocky, with all due respect, I can't make myself to welcome them.

It's because I don't believe they were on the ground when the Chinese tsunami happened on May 5 2013.

Note: Rocky is my blogging captain. Despite my disagreement with him on this matter, I don't allow anyone to whack him in this blog.
Posted by Annie at 23:18