Turning Najib into a simpleton

A friend who knows I'm writing this blog called me yesterday and asked me why I'm still defending DS Najib Razak amidst the mounting attacks against him by not just the Pakatan supporters but also those who are pro-Umno and BN.

This friend of mine who is a prominent pro-BN blogger was one of those currently rebelling against the Najib's administration.

My friend knows that I am unhappy too with the way Najib is currently handling things.

"We can't for instance let all those manipulative bastards around him continuously using the PMO (PM office) as a shield to do what ever they want," said my friend.

"They are turning the people against the establishment by what they are doing and Najib doesn't seems to realize it or probably even complicit with it," he added.

I told my friend that I totally agree with him on the part where Najib's administration need to clean up the crap and had posted several times on the matter in the hope that somehow Najib reads them and do something to correct the wrongs.

However, I don't believe in toppling Najib for now as I think he is not yet beyond redemption.

Furthermore, who are there to replace him at the moment?

His deputy TS Muhyiddin Yassin had made his stand clear before the Umno elections last year that he will not fight his boss.

The three current party vice presidents on the other hand had proven themselves to be quite incapable of anything really serious.

Yes, that includes the most popular among them DS Ahmad Zahid Hamidi who before the party election was touted as being brave due to all his saber rattling. Now, he is as quiet as a mouse after that stupid remarks about Syiah at the party's general assembly and the no action after the New Year ruckus at Dataran Merdeka.

Honestly, I would like those who are opposing Najib from the BN ranks to have a proper succession plan if they insist on replacing Najib.

Another thing the rebels need to bear in mind is that, unlike the movement to replace Pak Lah back in 2008, this time the Pakatan people are also pushing for Najib to be replaced.

Do note that now they are focusing on destroying Najib's image such as in the deliberate manipulation case of the kangkung issue.

They didn't do such things to Pak Lah back then.

I suspect that they believe once Najib is ousted, Umno and BN will be weaken in the ensuing power struggles as there are now no clear replacement in Umno for him. This will make it easier for Pakatan to win the next general election.

They also know that the entire Umno machinery is actually currently weak and the party survives merely because the Malays, most of whom were fence sitters still support the party as they couldn't stomach the other side.

So, the trick now is to go another notch higher in making Umno so revolting to the people and for that there is no better way than attacking Najib's personality.

They know that Najib is too nice a guy to be portrayed as evil. For instance, not many really believe that crap about him murdering the Mongolian girl.

So, this time they are trying to make him look stupid, incompetent and behaves like an idiot.

Najib the simpleton. That's how they will try to portray him from now on until GE14. 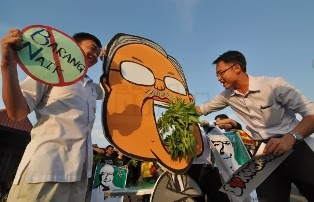 Thus the shoving of his mouth with kangkung incident. It was a good start for them.

Now on Najib's side. It made me cringed to see how they responded to these attacks.

His multitude of ministers, advisers, consultants and aides do not seem to have any clue on how to react.

I suspect that they don't have a game plan on how to fight these attacks against their boss.

The Umno headquarters manned by the likes of the obnoxious Ku Nan and that buffoon Rauf was equally useless. They seem to care more about who among themselves will get the contracts for party t-shirts, flags, buntings etc, than anything else.

That was why so many pro-Umno and BN bloggers had turned against Najib.

They are fed-up, frustrated and angry.

It's not just the bloggers though. It's the general feeling on the ground among ordinary supporters of BN and Umno, especially those who are not party members.

Personally, I have not yet given up on Najib. For now, I am still hoping for him to personally check on his people and clean up the mess in his camp.

It is not yet too late.

His few aides who are still doing a good job must help him realize that he needs to change the game plan.

Otherwise, not only Najib's position will become untenable, but so does that of BN's in GE14.

(Note to Tengku Shariffuddin : I think Akmar need more guidance in engaging the rebelling pro-BN bloggers. Otherwise things will only get worse. Thank you)
Posted by Annie at 09:32