"Allah" may become a name of Anak Bangsa Malaysia

Yesterday, reports from several churches around Selangor indicated that services had been held with the word "Allah" being used in reference to the Christian god.

A friend who met me after attending his church service proudly told me that the priest had made it a point to use the word.

He said the Christian community knows that the authorities would not dare to implement the laws which prohibit the use of the word "Allah" by Christians. and other non-muslims.

"They wouldn't dare, as if they do so, they will lose the support of Christians among the bumiputera of Sabah and Sarawak," he said.

It has become obvious from yesterday that the churches do not care about the Court of Appeal's decision on the matter and the recent decree by the Sultan of Selangor that the word "Allah" is exclusively to be used by Muslims in his State.

The raid last week by Jabatan Agama Islam Selangor where 300 copies of the Bahasa Malaysia Bible were confiscated had served as the trigger point in this latest round of "Allah" issue polemic.

It is an issue being kept alive  and reheated by DAP starting with the Lim Guan Eng's Christmas message of 2012 which was aimed at winning the crucial Sabah and Sarawak Christian bumiputera voters bank.

It has now becoming some sorts of a crusade among a large segment of Christians led by the evangelists of DAP such as Selangor state assembly speaker Hannah Yeoh, Teresa Kok, Tony Pua, the Ngah cousins of Perak etc.

Surreptitiously backed by powerful media organizations such as The Star, this movement which ultimate aim is to be the actual power behind the throne after the demise of Umno and its BN allies  feel that they are now strong enough to go even against  the Sultan of Selangor by not heeding to his decree.

They believe that they can get away with it.

Their thinking as articulated by my friend was that, if the authorities dare to  act against them, the wrath of the international community will hit this country in the form of economic sanctions or even military intervention.

A Muslim majority country oppressing its minority Christians - that will be the new international label of Malaysia. A pariah nation, which should be bombed to stone age, or so they believe.

In a way, they were right. The authorities wouldn't and shouldn't act recklessly on their acts of provocation.

I'm counting on the authorities to be cool in handling this issue.

However,  the law must be abided and those who break it must be punished.

The rule of law must prevail. Otherwise, what is the point of having the laws in the first place.

Those who break the laws must be punished, sooner or later.

Actually, there was no reason for them to go through this divisive argument, except that they had actually meant it as a political tool to win elections and gain power in this country.

If they were sincere, they could get what they want through proper legal means.

If they really want to change things in this country, then they must abide by the laws by getting enough of themselves as law makers at the polls.

The DAP evangelists must convince their Malay Muslims allies in PKR and Pas to go along with them to win enough seats to rule the country and then change the laws which they feel are being repressive of their rights as Christians.

They can then enact the law which among others will allow the word "Allah" to be used by the Christians.

I am sure Anwar Ibrahim will be able to convince the Malay Muslims of PKR to go along with this idea. Mat Sabu definitely could convince the Pas people to do the same.

Heck, they can even then enact a law allowing parents to name their children "Allah".

I know that Hannah Yeoh may be interested in naming her next baby as "Allah". 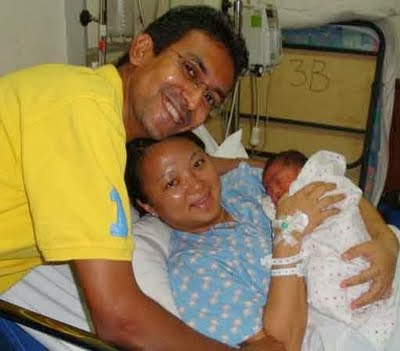 It sounds quite nice and could be categorized as a Bangsa Malaysia name.

Well, Hannah, you interested or not? After all, some Christians are known to have named their child Jesus. Why not "Allah" then?

You wear tudung once in a while and then name your next child "Allah" and I'm sure you can win more Malay votes in the next election.
Posted by Annie at 18:39